Left & Right - It was wall to wall people at Maestros for the Diaz Christmas party. 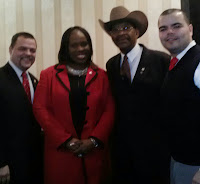