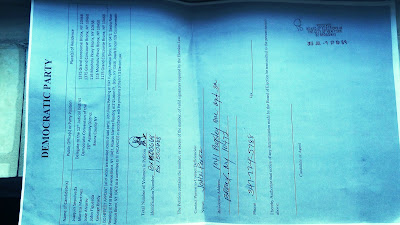 I was not at the petition hearings, because this year being an off year the only race was for Bronx District Attorney where there was no challenger to current Bronx DA Robert Johnson. The other positions to be fought over would be Judicial Delegates, and Alternate Judicial Delegates. I was surprised to hear from Mr. John Perez that his 3 slates of candidates in the 78th, 79th, and 85th A.D.'s were thrown off the ballot by the Board of Elections Commissioners. Mr. Perez had claimed that he never received any communication from the Board of Elections or the contact person for the challengers Election Lawyer Stanley 'King' Schlein. In my previous posting I found the four envelopes that were mailed by King Stanley, but they all lacked an apartment number. I was told that the carrier marked the 4 envelopes undeliverable due to the fact that the apartment number was missing which is a requirement when mailing something certified mail to a multiple unit building. Mr. Perez said there are over 150 apartments, and at least 3 other Perez families in the building.

This morning I went to the Board of elections where the original petitions were submitted to try to get some answers. I asked for Mr. Mike Ryan the head of the Board of Elections, I was told he was unavailable. I then asked for Ms. Valarie Vazquez who I worked with three years ago when I was investigating a similar problem. Ms. Vazquez was not in the building I was told, and her assistant Mr. Joshua Giaramita came out to talk to me. He assured me that Mr. Perez had left out his apartment number on all four petitions, and that was the reason that he did not receive any notice from the Board of Elections, and the reason all 4 petitions were thrown off by the commissioners.

I was able to obtain copies of all four of Mr. Perez's petition cover sheets, with BX 1500668 the first one handed in pictured above. As you see there is clearly an apartment number listed, and I went back to Mr. Giaramita with this information since he was sure that no petition had an apartment number on it. I then asked Mr. Giaramita if the Board of Elections had gotten the returned mail from the post office since it could not be delivered. He could not answer that question, and said that he would have to get back to me. I informed him that I was told it could be interpreted as mail fraud by the postal service if leaving off the apartment number was done intentionally so the packages could not be delivered. I said that both the Board of Elections and Mr. Stanley K. Schlein (the other contact person) had not placed the apartment number on any correspondence to Mr. Perez. I had earlier showed Mr. Giaramita the photos of Mr. Schlein's packages with the postal carrier's comments that it was undeliverable.

I suggested that there be a 2nd call on all 4 petitions since there had been an apartment number on the first petition which should have been the one gone by for an address, and said that the objections should be voided since there was no proof of service since Mr. Schlein had left off the apartment number either by mistake or on purpose. It will be up to Mr. Perez as to what to do if his petitions are not placed back in good standing, and his candidates not placed back on the ballot. A lawsuit of a conspiracy theory by both Mr. Schlein and the Board of Elections, or to make a federal case out of it.

Email ThisBlogThis!Share to TwitterShare to FacebookShare to Pinterest
Labels: 669, 670, and 671, UPDATE: Petitions BX 668