Members of the New York State Senate, Assembly and New York City Council called for the creation of an independent monitor to oversee the New York City Housing Authority following a scathing revelation from the New York City Department of Investigation that the authority lied about performing lead paint inspections.
Senator Klein proposed an independent monitor as part of the Independent Democratic Conference’s Changing New York Agenda in January 2017. It passed the Senate twice this year, both as part of the IDC’s one house budget proposal in March and as a standalone bill in June, however it failed to pass in the Assembly.
Following recent reports regarding falsified documents related to lead paint inspections by the agency, Council Member Salamanca announced the introduction of a resolution urging the creation of an independent monitor to oversee NYCHA operations.
“It is clear from recent events and the numerous reports that I’ve issued on NYCHA conditions that an independent monitor is the only way we can ensure that tenants have safe, livable housing. This new report today shows the continued incompetence of the agency in responding to residents’ requests to remove dangerous materials and make their residences habitable,” said Senator Klein.
“The time is now to finally act on our legislation to protect the over 400,000 NYCHA residents across the City. It is outrageous that there seems to be an endless flow of blunders that put our constituents well-being and lives at risk. An independent monitor to oversee the mismanagement will be a step in the right direction,” said Senator Diane Savino.
“NYCHA apartments represent the backbone of New York City's affordable housing stockpile and NYCHA residents have the right to expect clean, safe homes in good repair. Recent revelations of fraudulent statements sent by NYCHA to the federal government shows that outside supervision is sorely needed to make sure that NYCHA is on a firm footing for the future and that the voices of tenants are heard,” said Senator Marisol Alcantara.
“Like every New Yorker, every NYCHA resident deserves safe housing. Every child growing up in NYCHA housing deserves to be free from hazardous lead that can negatively impact their growth and development. Every parent raising a family in NYCHA housing deserves to know that their apartment is not poisoning them. With this report and the legislation we advance, we mandate meaningful transparency and independent oversight to give families in NYCHA housing the assurances they need. Your health and well-being matter – as someone who grew up in NYCHA housing myself, I know it is our duty to ensure NYCHA lives up to its responsibilities to every NYCHA resident,” said Senator Jesse Hamilton.
“NYCHA's false reporting on lead paint inspections represents a collapse of credibility in the public mind. The only hope for restoring public confidence in the leadership of the Housing Authority is an independent monitor, and I will not relent in holding NYCHA's feet to the fire until one is appointed,” said Public Housing Chair Ritchie Torres.
“Recent reports have made it crystal clear that the New York City Housing Authority is failing to live up to expectations when it comes to the safety and well-being of the more than 400,000 New Yorkers who call public housing their home. An independent monitor is greatly needed, and I join my colleagues in support of State Senator Jeff Klein’s efforts create an independent monitor and bring greater accountability to NYCHA,” said Bronx Borough President Ruben Diaz Jr.

“NYCHA is our last bastion of affordable housing and needs the best level of oversight and protection in light of most recent reports of the city’s inability to properly govern itself at the highest level of transparency and accountability. Now is the time for the state to take a more active role by creating ongoing oversight in an effort to monitor NYCHA and how it conducts its business. I am proud to stand alongside my colleague in government, Senator Klein in championing this legislation that will establish an independent monitor for NYCHA” said Assemblyman Walter T. Mosley.

Legislation proposed by Senator Klein would create an Office of the Independent Monitor within the Department of Homes and Community Renewal, to be appointed by the governor with the advice and consent of the Senate.
The independent monitor would have the power to review and would have oversight of any NYCHA project, including requiring corrective actions to remedy issues identified in projects. The monitor would also be required to prepare an annual report on the office’s activities, including any corrective actions it ordered.
Members of the Independent Democratic Conference also released a new report, “Public Housing Peril: The Need to Hold NYCHA Accountable,” on poor NYCHA conditions and the slow responses to requests from tenants to remedy their complaints.
Through a survey of NYCHA residents in partnership with Housing Chair Ritchie Torres and Community Voices Heard, the report found more than half of the respondents reported that they either currently have a mold or lead issue in their apartment or have had one in the past.
The survey also found that individuals who reported having mold and/or lead issues in their apartments generally did not receive prompt and timely responses from NYCHA building management. 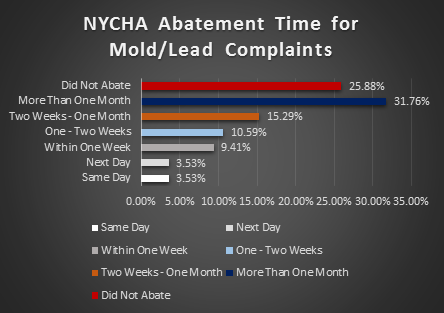 In addition to the creation of an independent monitor the report includes several initiatives to improve NYCHA operations, including enhancing reporting requirements and transparency.