Thursday night an unidentified man was shot in the face at the corner of Morris Park And Van Buren Avenues. The man was taken to St. Barnabas Hospital with wounds to his face. Police from the 49th precinct would only say that the unidentified man suffered an injury to his face (with part of the face was blown off by the blast). Police searched the area of the shooting, but did not find the shooter. Neighborhood residents who did not want to be identified said that this was the second shooting in the area (and same corner) recently. They also believed this was a hit by someone in the area. 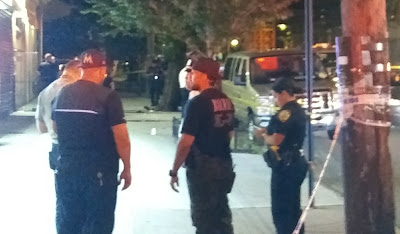 Above - Police from the 49th precinct stand guard over the crime scene. There was a representative of the Bronx District Attorney's office present at the crime scene. The cup in the foreground covers part of the face that was blown off.
Below - The fresh blood from the shooting victim lies on the sidewalk as evidence of the crime. Police officers try to figure out why the shooting happened, and who was the shooter. 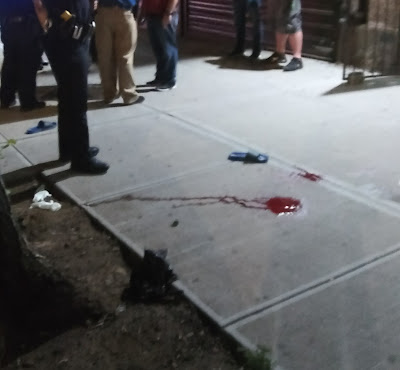