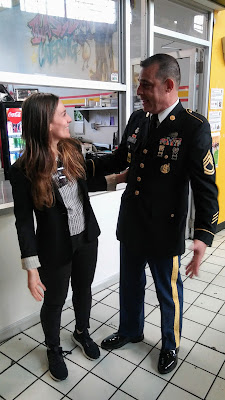 No the two candidates above have not endorsed each other, but are in two of the hottest primary races this election season.
Ms. Alessandra Biaggi is taking on incumbent 34th district State Senator (and former IDC Leader) Jeff Klein, while Sergeant John Perez is seeking the open 87th assembly seat vacated by now State Senator Luis Sepulveda.

In the 34th State Senate race Ms. Biaggi is being backed by various anti IDC groups, and is believed to have soon to be Congresswoman Ocasio-Cortez in her corner. It is a tough battle for State Senator Klein who does not want to wind up like his friend soon to be former Congressman Joe Crowley. More on this race in upcoming postings.

As for the assembly races challengers to incumbents are in the 78th A.D. where incumbent Assemblyman Jose Rivera faces a challenge from former corrections officer Jose Padilla. Also in the 78th A.D. State Committeeman Kenny Agosto is facing a challenger.  In the 84th A.D. Incumbent Carmen Arroyo is being challenged by former aide to Congressman Jose Serrano Amanda Septimo. In the 85th A.D. incumbent Assemblyman and Bronx Democratic County Leader Marcos Crespo faces a token opponent.

The big race in the Bronx for assembly is in the open 87th Assembly District. Bronx Democratic County Leader Marcos Crespo announced his candidate Nurse Karines Reyes back in February, and again in May. Former U. S. Army Sergeant John Perez announced his candidacy on the same day as Crespo made his second announcement. The third candidate who worked for the former Assemblyman Luis Sepulveda is Farah Despanies. In this race the two female candidates objected to each other, but no specifications to those objections were filed. Candidate Sergeant John Perez was objected to by candidate Reyes's camp, and then filed his own court challenge to the Reyes petition in court. A fourth candidate running with State Senator Sepulveda's opponent withdrew, and was replaced with candidate Despaines.

As an expert challenger myself, I looked at all three of the remaining candidates petitions in the 87th A.D. I found fatal mistakes in the Reyes petition, and could not believe that the petition was handed in as is. Candidate Sergeant Perez should have an easy time of knocking Nurse Reyes off the ballot, and the court date is next week. Candidates Despanes and Sergeant Perez both handed in petitions that were better than the Reyes petition, and while there were only minor mistakes both should be on the ballot for the 87th Assembly District. It will be a very exciting assembly race in the 87th A.D. as I am already getting calls from my colleagues in the media about this race.

More to come, and I am sorry that the usual blog postings have not been able to be put up.