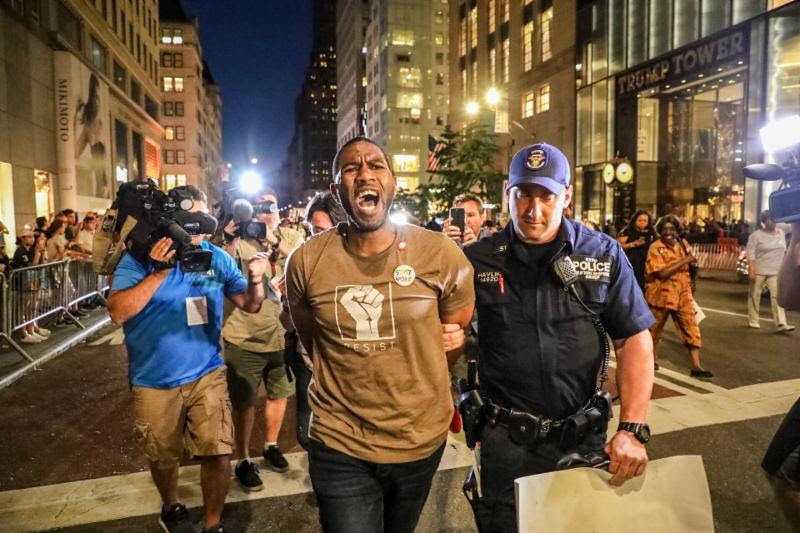 Lieutenant Governor candidate Jumaane Williams was arrested outside Trump Tower last night as he protested President Donald Trump's nominee for the Supreme Court-- D.C. Court of Appeals Judge Brett Kavanaugh. He was charged with disorderly conduct and released from NYPD custody shortly after midnight EST.
Before being arrested with a group of protesters and being removed from the area in a police van, Williams called on Democrats to find the moral conviction to stand up to President Donald Trump and his extremely conservative Supreme Court nominee.

"My message is to the Democrats who think resistance is just a hashtag," he said to protestors outside of Trump's skyscraper on Fifth Avenue and East 56th Street. "We have fought for protections for so many, fought hard for black, brown, LGBT, for women. All of that is now at risk, not because of bigoted Republicans, but because of Democrats who refused to step up because they were afraid. I am begging all Democrats-- all those that claim leadership-- to take a risk, show courage. If you are in your comfort zone, you are not doing enough."

During the rally, Williams emphasized his concern that the extreme-right Court could overturn Roe v. Wade, a landmark 1973 ruling that made abortion a constitutional right, and condemned Governor Cuomo for failing to advance legislation that would protect women's rights on the state level by empowering the right-leaning Independent Democratic Conference (IDC).

"Establishment democrats like the Governor Cuomo and Lt. Governor Hochul have led us to where we are today," Williams added. "They have had every opportunity to pass progressive legislation that ensure women have access to safe and legal abortion, but lacked the moral courage to advance what's right, putting their own personal political gain ahead of those they represent. Now that the political winds have swayed and more progressives are demanding action, I would not be surprised to see the establishment follow our lead. But come September, New Yorkers will decide if they want elected officials who follow or lead at the helm of our state's government."