Is The Karines Reyes Petition is Permeated With Fraud? 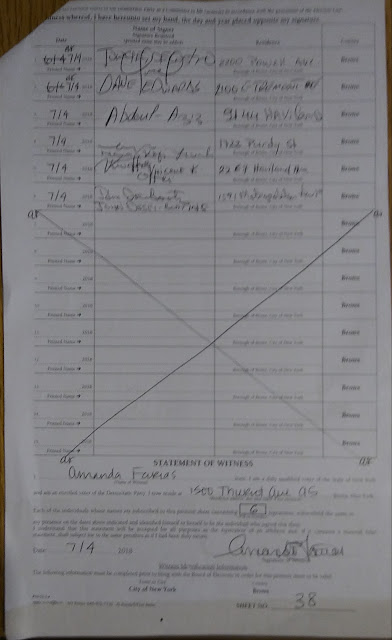 87th Assembly District candidate Sergeant John Perez claims that the petition of one his opponents in the 87th A.D. race Karines Reyes is permeated with enough fraud to have her entire petition thrown out. As you can see in the photo above the date on the first line was 6 - 4, and was changed to 7 - 4 Sergeant Perez claims. He also says that the Reyes petition was placed on line (Facebook by a vice-President of the Bronx Democratic County organization ) one week before the first day to collect signatures down to the State Committeewoman slot as not to show the choice of Amanda Farias over the current State Committeewoman Ms. Barbara Brown who is running with Sergeant Perez. Sergeant Perez claims that there are many other pages where the Subscribing Witness collected signatures before the first day to collect signatures.

Ms. Amanda Farias whose signature is on the page above is the candidate for State Committeewoman on the Reyes petition. Ms. Farias also ran last year unsuccessfully against Councilman Ruben Diaz Sr. If the court rules that she collected signatures before the first day to collect signatures she would be thrown off the ballot. Sergeant Perez claims that the Male State Committeeman also collected signatures before June 5th which was the first day to collect signatures. Sergeant Perez claims that Mr. Westbrook has a date of 6 - 1 where an 8 is written over the 1.

There are many other claims of fraud which are to numerous to list here, but I took a look at the Reyes petition and saw that staff members of State Senator Luis Sepulveda collected signatures. It is on those pages where some of the fraud is claimed. As an expert petition challenger in my opinion the claim that the Reyes petition contains enough fraud to put it close to two-thirds should be enough to throw out the entire Karines Reyes petition and all the candidates for party positions.

State Senator Luis Sepulveda's son Julian challenged the Sergeant Perez Petition and that of a fourth candidate for the assembly seat who was running with Senator Sepulveda's opponent for the state senate. Mr. Westbrook challenged the petition of the third assembly candidate. I spoke to the third candidate in this race who worked for then Assemblyman Luis Sepulveda, and whom was told to collect only 750 signatures (just 250 over the minimum required). It would seem that if candidates Reyes and Perez were to knock each other off the ballot, then the third candidate a former employee of Sepulveda would then walk into the assembly seat.

If you think the Derek Jeter incident in the 2013 City Council race needed to be investigated, I am sure the U.S. Attorney's office will have a field day with the Karines Reyes petition. Not only does Sergeant Perez have a laundry list of fraud, but all one has to do is just look at the different colors of ink used on many of the pages in how signatures were collected, dates and addresses were placed on the petition sheets, and most of all just who signed the petition sheets?

Much more to come on this in future postings because, That is what you need to know. 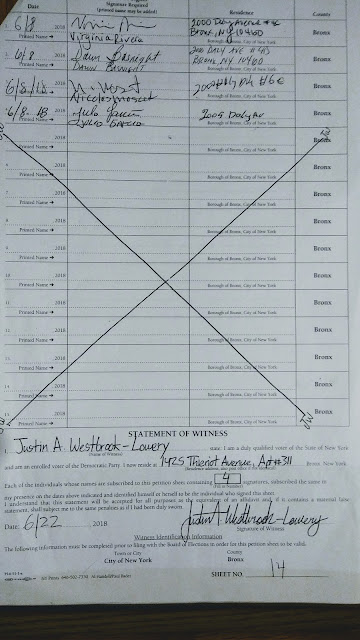 The page submitted by State Committeeman Westbrook with the first line date containing what appears to be an overlay of an eight over a one.

Email ThisBlogThis!Share to TwitterShare to FacebookShare to Pinterest
Labels: Is The Karines Reyes Petition is Permeated With Fraud?