Riverdale Rally in Support of Tree of Life Congregation in Pittsburgh, Pennsylvania 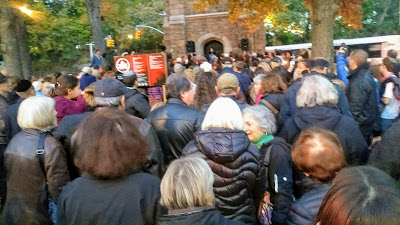 Hundreds of residents of Riverdale and others came together at the Riverdale Monument at the intersection of Riverdale Avenue and West 239th Street in support of what happened at the Tree of Life Congregation in Pittsburg last Saturday during Sabbath Services.

Elected officials were on hand but did not speak, and police from the 50th precinct did a fine job of keeping the rally safe, while allowing rush hour traffic to flow. Riverdale is home to the largest Jewish population in the Bronx with many different synagogues offering the residents religious services.

People who attended said they wanted to show support, and some were afraid that this could happen in Riverdale. Several years ago the police and Homeland Security foiled a plot to bomb two synagogues in Riverdale. 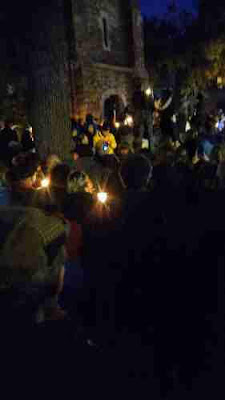 As nighttime arrived people were holding candles for those who were killed in the Tree of Life synagogue.

Email ThisBlogThis!Share to TwitterShare to FacebookShare to Pinterest
Labels: Pennsylvania, Riverdale Rally in Support of Tree of Life Congregation in Pittsburgh