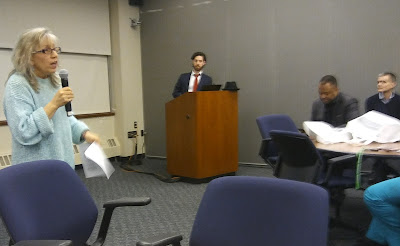 Representatives of the developer for a proposed 228 unit nine story building on Blondell Avenue listen to CB 11 member Bernadette Ferrera's concerns about the huge building, and what it will due to the surrounding area.

After a few people spoke in favor of the Blondell Avenue building proposal, which included a merchant from the neighboring Westchester Square Business Area. Then over twenty people spoke against the proposed building some saying that the only way the Westchester BID supported it was because the amount of parking spaces increased from 56 to over 200, with some of the added parking for shoppers on a paid parking fee. People questioned building such a large housing unit when the area government services such as schools, police, sanitation, and others are already overcrowded or over burdened.

When the Public Hearing was over a vote of the board was taken on a resolution against the proposed building as part of the Land Use process since this project had to go through the ULERP process due to certain components of the project. The vote was twenty-six in favor the board opposing the building, six against the board opposing the building, and two abstentions. members of the community rejoiced in happiness, but the ULERP process now goes to a public hearing by the borough president on December 28th in the Bronx County building. 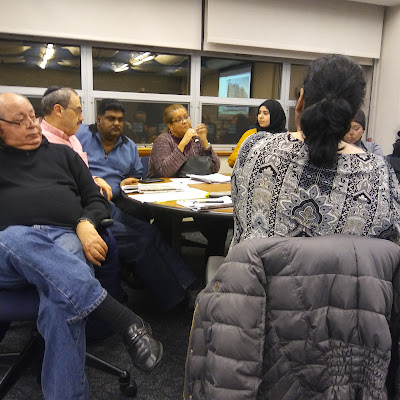 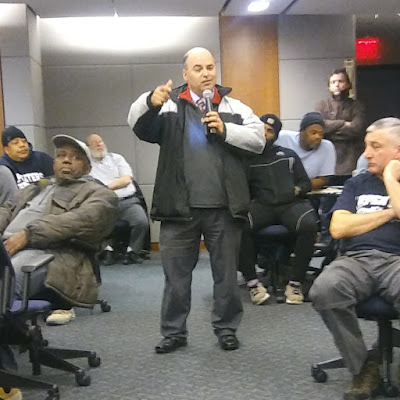 Email ThisBlogThis!Share to TwitterShare to FacebookShare to Pinterest
Labels: Community Board 11 Votes Down Proposed 228 Unit Building on Blondell Avenue