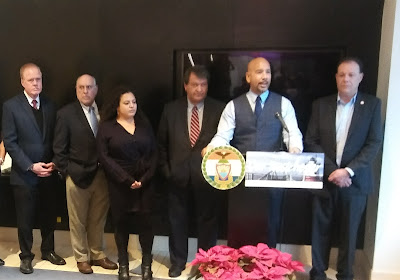 Bronx Borough President Ruben Diaz Jr., Westchester County Executive George Latimer, other elected officials and key stakeholders spoke out in support of the expansion of Metro North service to the East Bronx and the need for Amtrak to get out of the way of this much needed, universally popular project. These four new lines will save Westchester residents, most notably those on the Sound Shore, both time and money by shortening their commutes through the creation of new one-seat ride into Penn Station from Westchester.

Diaz said: “We are here to come together to call on Amtrak to stop getting in the way of progress of these four desperately needed Metro-North stations – needed not just for the Bronx but for the entire region. Everyone knows this is a good idea for commuters, the potential for job opportunities and its impact on congestion, and everyone is on board – except Amtrak.”

Latimer said: “This is a story about cooperation between the suburbs and the city on a project that is both good for the Bronx and good for Westchester County. We have a common interest here, and what the Borough President and other leaders have done is see the common benefit of opening up these lines to provide benefits in both directions. Access to Penn Station is advantageous for those who live in Westchester along the Sound Shore and need to commute to the Bronx or parts of Manhattan for work, making those communities even more attractive to live in and raising property values in the process.”

This project – known as the Penn Access Project - would provide a vital rail connection for Westchester to the west side of Manhattan and the East Bronx. At this time, the MTA has a plan in place to build four new Metro-North Railroad stations in the East Bronx that would also serve to benefit Westchester commuters by connecting the New Haven Line to Penn Station directly.

To get this vital project back on the track, Amtrak must agree to align work schedules and scope of the project and allow the MTA reasonable access to Amtrak-owned tracks and right-of-way. This agreement has yet to occur due to Amtrak’s demands for the MTA to pay more than its fair share. The MTA will already be carrying most of the expense of upgrades, including rebuilding the Pelham Bay Bridge, and Amtrak would be the beneficiary of track improvements and operational flexibility, under-grade bridge improvements, and power, signal and communications upgrades. This standoff puts the entire project in jeopardy - at the expense of thousands of riders.

“Creating a new mass transit option for East Bronx and Westchester commuters to Manhattan would be a transportation game changer for those transit-needy areas. A new rail line with four new Bronx stations will substantially reduce travel time, better link the Bronx and Westchester to job markets, enhance economic development and offer vital system resiliency to withstand future disasters,” said U.S. Senator Charles Schumer. “Expanding mass transit options can spark job growth and reduce commute times, which is what we need for our entire region, and why Amtrak must work with the MTA to get this project done for the people of the Bronx and Westchester.”

Congressman Eliot Engel said: “It’s long past time for the East Bronx to have its rail service expanded, and that can only happen with Amtrak’s cooperation on the Penn Station Access Project. My constituents in both the Bronx and Westchester deserve to have greater rail access, which not only will improve travel and reduce pollution, but will also provide economic benefits to the entire region. I join County Executive Latimer, Bronx Borough President Diaz Jr., and all of my colleagues in government in calling on Amtrak to get on board with us and move this project forward.”

Congresswoman Nita Lowey said: “The strong bipartisan support for Penn Station Access speaks to the absolute necessity of the project. Penn Station Access will provide much-needed relief for commuters, saving them significant amounts of time and money by connecting Westchester and Manhattan’s west side. It will also improve transportation capacity and resiliency and drive economic growth throughout the region. I look forward to continuing to work with our partners at all levels of government to secure Amtrak’s cooperation in moving this project forward.”

New York State Senator Jamaal Bailey said: "I represent both The Bronx and Westchester Counties, two locations that stand to benefit greatly from this project. One of the neighborhoods in my district is Co-op City, essentially a ‘city within a city’ that consistently struggles with adequate transportation to Manhattan and other areas in The Bronx. The Metro-North station in Co-op City is desperately needed in order to ease the transportation struggles that currently exist. As such, I stand with Borough President Diaz Jr. and County Executive Latimer and call on Amtrak to support this project and facilitate in ensuring it is built so that thousands of residents can benefit from excellent mass transportation."

Assemblyman Marcos A. Crespo said: “Expanded Metro North service will have a game-changing impact on the lives of Bronx residents both by adding transportation options to a neglected transportation desert in the East Bronx, and better connecting residents to greater job and opportunity markets. I thank Borough President Diaz and County Executive Latimer for leading the call that Amtrak no longer stand in the way of this vital project.”

Assemblyman Michael Benedetto said: “Adding Metro North Railroad service to the transit-starved east Bronx is vital to the economy of New York City, Westchester County and the state. I call on Amtrak to quickly conclude negotiations with the Metropolitan Transit Authority in an earnest and reasonable manner to move this project forward.”

Assemblywoman Nathalia Fernandez said: “The Bronx has consistently been left behind when it comes to our transportation needs. The East Bronx Metro-North expansion project is a necessary step toward ending transit inequality in our community. We cannot allow Amtrak to hold our residents back. They need to take responsibility to ensure this project becomes a reality. The people of this borough have had to contend with a crumbling transportation system. These new MetroNorth stations are a paramount component to addressing the transportation, environmental, and economic challenges of our communities. We welcome investment in our communities, but we demand that corporations be good neighbors and partner with us in good faith. Amtrak has a responsibility to the people of the Bronx. Our health and mobility is at stake, yet Amtrak demands the cash-strapped MTA help pay for repairs of their own unmaintained property. These demands are unconscionable. Bronxites need these MetroNorth stations now more than ever, and we need Amtrak unequivocally on board.”

Assemblyman Jeffrey Dinowitz said: “There is no question that our transit infrastructure is ancient and our transit networks are antiquated. President Trump campaigned on making our infrastructure great again, but for two years all the federal government has done is get in the way of actual progress. Where the federal government has failed, New York is investing $1 billion to improve Amtrak infrastructure (which is operated by a federal government-owned corporation) through LIRR East Side Access and Metro-North Penn Station Access. Amtrak needs to stop extorting our state for more money and instead get out of the way of better mass transit in the Bronx.”

New Rochelle Mayor Noam Bramson said: “Penn Access represents an extraordinary opportunity for our entire region to spur job growth, expand access to employment, and foster transit-oriented development. I am proud to stand with leaders in Westchester, the Bronx and throughout New York in advocating for this vital enhancement of mass transit options.”

Bronx Chamber of Commerce Chairman Joseph Kelleher said: “The Bronx is experiencing amazing growth—new commercial and residential development is on the way throughout the borough, many companies are relocating to the Bronx creating jobs. The new Metro North Train Stations will provide improved transportation resulting in major economic development and opportunities for the residence and the businesses in the Bronx.” 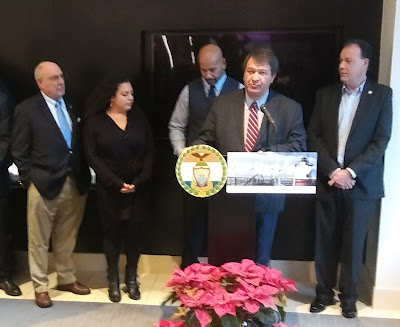 Email ThisBlogThis!Share to TwitterShare to FacebookShare to Pinterest
Labels: OTHER ELECTED OFFICIALS AND KEY STAKEHOLDERS CALL ON AMTRAK TO GET TO WORK ON PENN STATION ACCESS PROJECT, RELEASE: BP DIAZ, WESTCHESTER CE LATIMER