Comptroller Stringer: Playground “Deserts” Leave Too Many NYC Children with No Place to Play

Playground construction is failing to keep pace with the growing population of children in several neighborhoods
Brooklyn is the most under-served borough, with only eight playgrounds for every 10,000 children
Playground maintenance is completely inadequate, with 521 NYC Parks playgrounds having at least one hazardous feature requiring “immediate attention”
Comptroller Stringer launches “Pavement to Playgrounds” campaign, utilizing an innovative model for building out city playgrounds and calling for the construction of 200 new playgrounds in the next five years
New York City Comptroller Scott M. Stringer released a new report, “State of Play: A New Model for NYC Playgrounds,” documenting a severe shortage of playgrounds in New York City, particularly in neighborhoods that have seen the fastest population growth. Access to playgrounds varies significantly across community districts, with some containing more than triple the number of playgrounds as others on a per child basis, and neighborhoods with the largest population of children — e.g. Bensonhurst, Borough Park, Corona, Richmond Hill, and Flatbush — having fewer than four NYC Parks playgrounds for every 10,000 children. Looking more broadly, New York City ranks a lowly 48th in playgrounds per capita among the 100 largest American cities, evidence that the City has not sufficiently invested in recreational facilities and failed to anticipate, prepare, and respond to shifting demographics.
Meanwhile, conditions at hundreds of NYC Parks playgrounds were found to be substandard during their latest inspections. In 2018, inspectors found that 521 NYC Parks playgrounds had at least one hazardous feature that required “immediate attention.” These included 807 “Priority 2 Hazards” that “present the chance of slight to moderate injury” and 29 “Priority 1 Hazards” that “present the chance of life-threatening or debilitating injury.”
To address this urgent need, Comptroller Stringer outlined sweeping recommendations for reform, including calling on the City to build 200 new playgrounds in the next five years. Many of these new facilities would be built through Stringer’s newly envisioned “Pavement to Playgrounds” program — a proposed partnership between NYC Parks, the New York City Department of Transportation (DOT), local nonprofits, and community boards — to construct playgrounds and plazas on lightly used residential blocks. Other recommendations from the report include dramatically expanding the successful “Schoolyards to Playgrounds” program, increasing resources for NYC Parks maintenance, developing stronger protections for “Jointly Operated Playgrounds” on DOE property, and ensuring that playgrounds are designed to serve a wide range of ages to better promote learning, playing, and socializing.
“Playgrounds are essential public spaces, offering children a place to socialize, learn, be active, and exercise their imaginations. They are also spaces for children and families to meet their neighbors and develop strong bonds. But our findings reveal stark disparities in access to these critical public spaces in New York City,” said Comptroller Stringer. “That’s why our City needs to overhaul the planning, construction, and maintenance of our playground system. We can make a major impact on the lives and health of New York City children by substantially expanding the number of playgrounds in neighborhoods that are in dire need of these spaces, while also ensuring they are well-maintained and safe for every child.”

Comptroller Stringer’s report examined all 2,067 municipal playgrounds in New York City, of which 1,028 are overseen by Parks, 796 are managed by NYCHA, and 243 are “Schoolyards to Playgrounds” conversions co-administered by NYC Parks and the New York City Department of Education (DOE).

A Lack of Safety

Comptroller Stringer’s report also found that hundreds of NYC Parks playgrounds were rated as “unacceptable” by Parks Inspection Program inspectors due to a) multiple features being unsatisfactory, b) one feature having a serious safety hazard, or c) the playground having a failed cleanliness rating.

Pavement to Playgrounds: An Innovative Approach to Scaling Up our Playground Network

Comptroller Stringer’s report outlined a new model for building out New York City playgrounds, inspired by a small neighborhood playground in Crown Heights. In partnership with DOT and local community boards, NYC Parks would identify neighborhood streets with minimal through traffic — either disconnected from the local grid or at dead ends — and build playgrounds mid-block (see rendering below). Angled street parking would be introduced so that the total number of parking spots would remain constant. 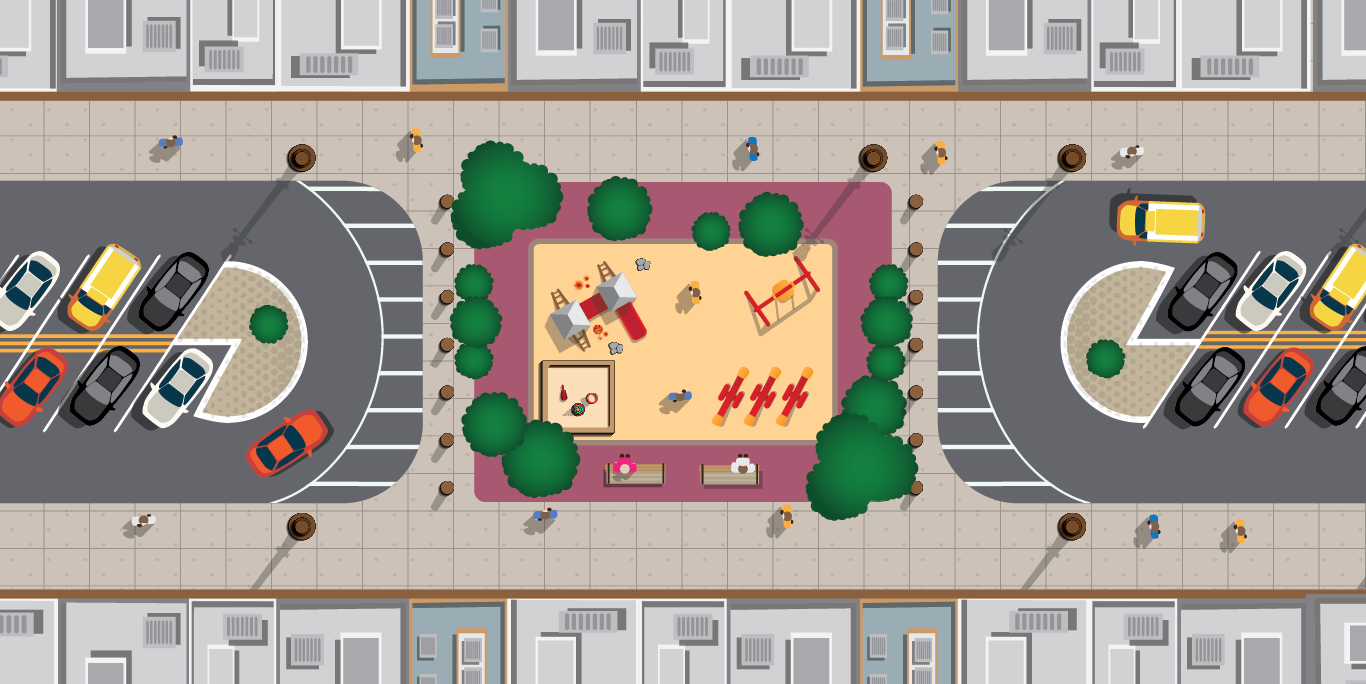 Expanding the “Schoolyards to Playgrounds” Program

Comptroller Stringer’s report highlighted the success of the City’s “Schoolyards to Playgrounds” program, a partnership between NYC Parks, the New York City Department of Education (DOE), the New York City School Construction Authority (SCA), and the Trust for Public Land. 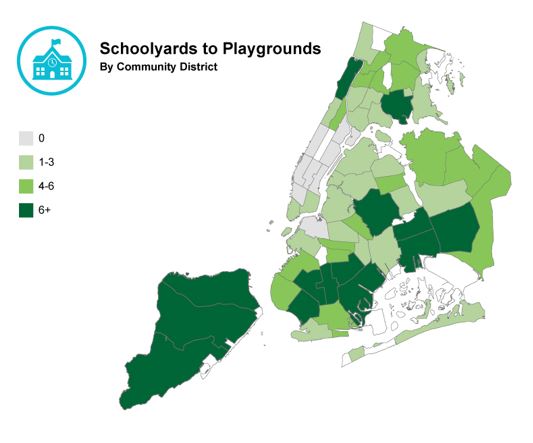 Comptroller Stringer called for an additional 100 “Schoolyard to Playground” conversions in the next five years, specifically targeting high-need neighborhoods in the Bronx, Brooklyn, and Queens that have experienced a substantial increase in their youth population.

Given the high number of playgrounds with hazardous conditions, Comptroller Stringer called on NYC Parks to prioritize playground maintenance to ensure hazardous conditions are addressed through increased funding for maintenance and operations. These budget increases should be consistent with proposals outlined by the Play Fair Coalition — a consortium of more than 100 community-based organizations as well as NYC Parks employees.
Posted by 100PercentBronx at 3:58 PM

Email ThisBlogThis!Share to TwitterShare to FacebookShare to Pinterest
Labels: Comptroller Stringer: Playground “Deserts” Leave Too Many NYC Children with No Place to Play