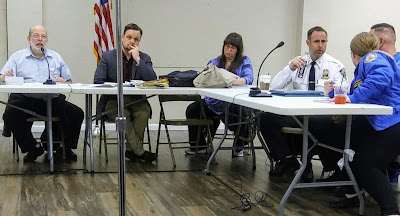 (L - R)  45th Precinct Council President Bob Bider, Sergeant at Arms John Doyle, Treasurer Annie Boiler, Captain Frasor, and the Community Affairs officers of the 45th precinct. not in the photo to the right of Mr. Bider is the Secretary Sonia Feliciano.

The 45th Precinct Council meeting Thursday night was in Coop-City as Captain Frasor mentioned that crime continues to go down in the city and in the 45th precinct. The Cop of the Month went to Police officer Juan Martinez who during a routine traffic stop was able to spot a laded handgun in the car he had stopped. Captain Frasor praised the officer, and said that it was one less gun on the streets of the Bronx. Representatives of local elected officials told of events coming up by their office. Captain Frasor took individual questions from the audience which were mainly about Marijuana smoking and the new regulations, and what the police can and can not do. 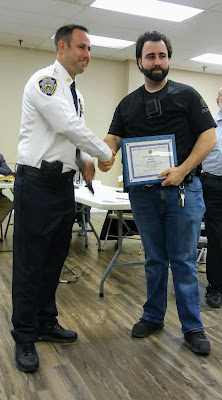 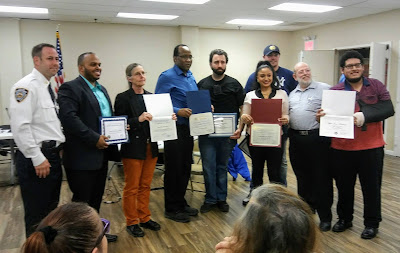