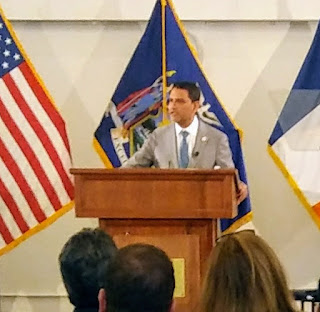 Senator Biaggi began her speech with memories of her grandfather former Congressman Mario Biaggi, with some family history of how he wound up running for elected office. In her speech she parrelled her calling to run for office to that of her grandfather. She said that one is not to think of themselves, but they can help the community as a whole.

She went on to say that while there are now thirty-nine Democratic State Senators things have not changed as she thought they would. There is still much to little sharing of power while you have to vote for something that has other items you might not vote for is attached to it.

Senator Biaggi mentioned how her campaign went by knocking on doors, talking to people to see what they wanted from their representative, and trying to be what the people wanted her to be. She mentioned that she is a survivor of child sex abuse, and spoke of some of the new legislation passed in 2019 with the new Democratic State Senate.

Then Senator Biaggi spoke of changing things in Albany such as the budget process. The Courage, Disruption, and Resilience that is needed to change the way things are done in Albany, and how those three things can change the old way things get done into a newer better way.

She ended by saying that the tide is always right to do what is right, by rejecting the status quo in Albany.

Afterwards Senator Biaggi went outside to protest on campus with professors who want higher wages claiming that the current wage scale is to low for them. 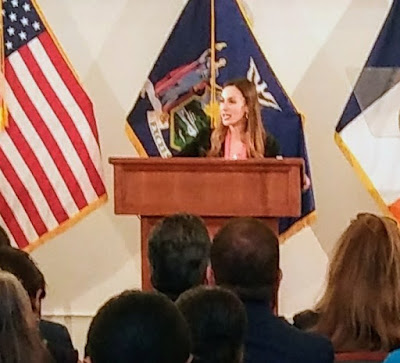 Above - State Senator Alessandra Biaggi gives the 50th Annual Herbert Lehman Memorial Lecture.
Below- After the lecture Senator Biaggi went outside to call for higher wages for CUNY professors. 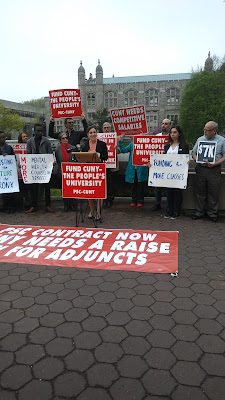