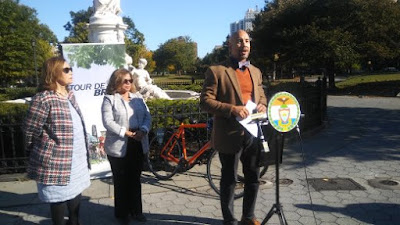 Borough President Diaz encouraged riders interested in participating in the Tour de Bronx to sign up at www.tourdebronx.com.

“I am excited it is that time of the year again, that time of the year where we get to welcome thousands of local and internationals cyclists and biking enthusiasts who descend to our great borough for the Tour de Bronx,” said Bronx Borough President Ruben Diaz Jr. “Riding a bike around The Bronx is not only a great way to rediscover our beautiful borough as well as showcasing alternative modes of transportation, but it also complements our ‘#Not62’ health initiative, highlighting the ways we can stay health, as a community.”

“It is wonderful to see how this amazing event has evolved in the last 25 years. We enjoy the company of cyclists from all over the globe!” said Bronx Tourism Council Executive Director Olga Luz Tirado.


The event offers both a 25-mile and 40-mile course, each of which winds through dozens of beautiful Bronx neighborhoods, historic districts, parks, waterfront, Greenway paths and more. Both routes culminate at the New York Botanical Garden for end-of-ride refreshments and a music festival.

The Tour De Bronx event has grown exponentially since its inception, with the 2014 edition of the Tour de Bronx having seen a record-breaking 7,500+ participants from all over the country gather on the Grand Concourse. 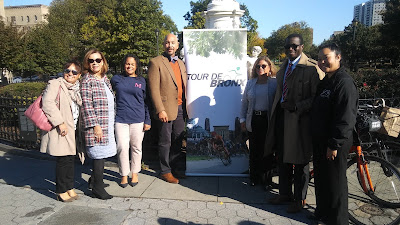 BP Diaz Jr. is joined by several of the sponsors of the Tour De Bronx.