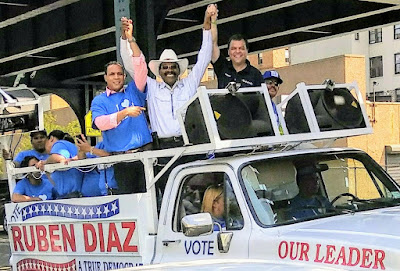 Primary day 2020 will go down in election history as this was a totally new way of campaigning. The petition process was cut down, and the number of signatures required to get on the ballot was lowered. Little did anyone know what was going to happen next. For almost the entire primary season there was little if any campaigning due to the pandemic that hit New York and the country. Little known challengers had the chips stacked against them as they could not get their message out, as this Pandemic has given well known incumbents an extra advantage.

Here is how I think Primary 2020 will turn out.

Congress.
14th Congressional District -
The very well known AOC is the incumbent. Unlike two years ago as the challenger she took full advantage of debating the incumbent, this year as the incumbent she did not want to give either of her opponents any publicity. She did not want to attend the Parkchester Times debate this year which was the only live face to face debate of the primary season. while finally pressured into attending AOC made some demands which included that only ten people be in the room which would include the candidates, moderator, and several camera people only, with no reporters inside the room.
The results of this race will probably not be known until all the paper ballots are counted. While AOC faces three opponents. Michelle Caruso-Cabrera is the main opponent, and it is unclear who the third woman in the race Badrun Khan will take votes from. In the Bronx it should be AOC, because Khan's support comes from the Parkchester area where AOC lives. Caruso-Cabrera should win the Bronx, but the battlefield will be in the larger Queens part of the district. The fourth candidate Sam Sloan got no attention and should not get more than a handful of votes.  Too close to call.

15th Congressional District -
Current City Councilman Ruben Diaz should win with about thirty percent of the vote. Just who will come in second and by what percentage is a little harder to guess as the Michael Blake campaign has no where near the resources that the Ritchie Torres campaign has. Those two should finish  behind Diaz, but by how much and who comes in second is questionable. No other candidate in this race should break the 10 percent mark.The next tier of candidates should be Chivona Newsome, Melissa Mark-Viverito, Thomas Ramos, Samelys Lopez, and Ydanis Rodriguez (in no special order). Bringing up the rear should be Julio Pabon, Mark Escoffery-Bey, Michelle Tapper, and Frangeli Basora.

16th Congressional District -
With four challengers still on the ballot Current Congressman Eliot Engel should be able to win as his opponent's main cause for change was Engel's gaf on Fordham Road. Jamaal Bowman should come in second, but by how much? Former police officer Sammy Ravelo should follow, with Christopher Fink next followed by Andom Ghebreghiorgis who will still be on the ballot even though he has officially withdrawn and is supporting Bowman. State Senator Alessandra Biaggi may be putting her neck on the chopping block as she first endorsed Engel, but then when AOC endorsed Bowman Biaggi withdrew her support of Engel to go with Bowman also, at the time of the gaf by Engel. It should be noted that Engel beat Senator Biaggi's grandfather Mario Biaggi in the 1988 election, and word is that she wants that congressional seat. With Assemblyman Jeffrey Dinowitz having a soft primary that should help Engel win the voter rich Riverdale area of the district where the Dinowitz name is solid.

32nd State Senate District -
Current State Senator Luis Sepulveda won the seat with the help of Former State Senator Ruben Diaz. This year Diaz has renounced his support of Sepulveda calling it a mistake, and is supporting former Army sergeant and current 87th A.D. District Leader John Perez for the 32nd State Senate seat. Sepulveda has his own worries as his brother sent a report to the state senate. In the report his brother says State Senator Luis Sepulveda is a Child Molester, Drug User, Drug Dealer, and comes from a Mafia style family as was reported by Zack Fink of NY1 television. There is a third candidate Pamela Stewart-Martinez. John Perez is confident of a victory as he says Sepulveda's troubles keep mounting as Sepulveda ran with Michael Blake, and is now where the money is with Ritchie Torres. With the support of Ruben Diaz, John Perez should be able to beat this one term incumbent.

79th Assembly District -
Current Assemblyman Michael Blake is running for congress leaving a vacant seat. Blake is supporting candidate Chantel Jackson, Businessman George Alvarez is running with 15th congressional candidate Ruben Diaz and 32nd State Senate candidate John Perez, Current Female District Leader Cynthia Cox is running with the support of the Bronx Democratic County organization. Former Assemblyman Eric Stevenson who was removed from office and sent to jail is also in the top tier here. Candidates Dion Powell and Elvis Santana round out the pack. This race again is too close to call as it should be the absentee ballots that determine this race.

The photo is from 2017, and George Alvarez is on Ruben Diaz's right (our Left), while current State Senator Luis Sepulveda is on the other side. Ruben Diaz has renounced his support of Luis Sepulveda calling it a mistake, and is supporting the current 87th A.D. District Leader John Perez to replace Luis as the state senator from the 32nd State Senate District.
Posted by 100PercentBronx at 8:42 AM

Email ThisBlogThis!Share to TwitterShare to FacebookShare to Pinterest
Labels: NY Primary Day 2020: Who Will Win?