A New Place For Speed Bumps

With all the ways Mayor Bill de Blasio and his Department of Transportation have come up with to slow or try to eradicate vehicle traffic, another new idea was found today.  It appears that the latest brainchild of the current mayor is to put speed bumps around crosswalks. Five feet before and about two feet after the ten foot wide crosswalk, rubber speed bumps are being screwed into the street sideways in the yellow line.

I asked one of the workers what he was doing. His reply was that at selected intersections the mayor wants speed bumps before and after crosswalks so drivers won't turn into the crosswalks. My first thought was when the city has no money the mayor will cut help, but have crews go around the city to put new speed bumps in the middle of the street before and after crosswalks sideways. If one walks outside the crosswalk it is quite possible to trip over these new crosswalk speed bumps. This location is Riverdale Avenue and West 236th Street. More have been put in at selected intersections since this post went up.

Above - A side view of the new speed bumps being put in the yellow line before and after crosswalks so drivers won't drive into a crosswalk.

Below - A head on view of what the new speed bumps in the yellow line look like, and a car that just made a turn through the crosswalk. The intersection is Riverdale Avenue and West 236th Street. 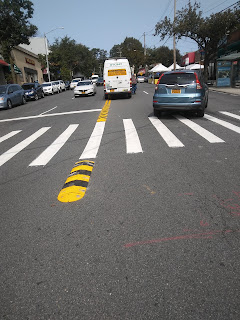