An update from Comptroller DiNapoli: NY's Economy & Finances in the COVID-19 Era

Statewide, 28% of Lost Jobs Have Been
Regained Through July; in NYC, 17%

While New York State has regained more than one in four of the jobs it lost in March and April, the unprecedented scale of losses due to the COVID-19 pandemic leaves a daunting path ahead for the State to climb back to pre-recession employment levels. For New York City, the picture is even more troubling.

New York State’s job count fell by more than 1.9 million in March and April. Through July, the State had regained 548,000 jobs, or 28 percent, as shown below. 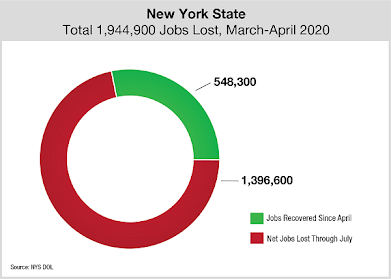 The COVID-19 recession cost New York City 944,100 jobs in March and April, nearly half the statewide total. Since then, the City has regained 161,000, or 17 percent – with most of the gains (101,000) occurring in June.Throughout New York State and nationally, unemployment rates spiked upward in April. Since then, unemployment has moderated noticeably both for the nation and for the State outside New York City. However, the City’s unemployment rate in July (latest figures available) remained several points above its April level.

For more current highlights on the impact of the COVID-19 pandemic on the State’s finances and economy, visit our web page. Additional topics this week include:

The State Comptroller's office is committed to keeping New Yorkers regularly updated on the state's economy and finances.