Every few months the painted Bus Only Lanes have to be repainted. In the past there was a truck that sprayed a thin layer of new paint over the Bus Only Lane to identify that the lane was for buses only. Saturday there was a different system used to repaint the Bus Only Lane on Pelham Parkway East. Traffic was down to one lane Eastbound as two lanes were closed for the painting. Several men were in a truck pumping the orange paint from a large drum into small buckets.

This time instead of a thin spray the paint was poured out by the bucket across the lane. Men then spread the paint across the lane, while others with rollers at the end of long sticks rolled over the paint to even it out. Blue tape was placed around the 'Bus Lane Only' markings in the lane so they would not get painted over. I was told this paint job would last up to three years. We will see how long it lasts from the rain and road salt that goes on it. 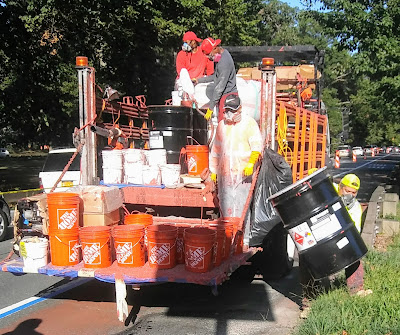 Above - The truck with the drums of paint that are put into little buckets. One such empty paint drum is dropped from the truck.

Below - Paint is poured onto the lane one bucket at a time. The almost unpainted Bus Only Lane can be seen in the background. 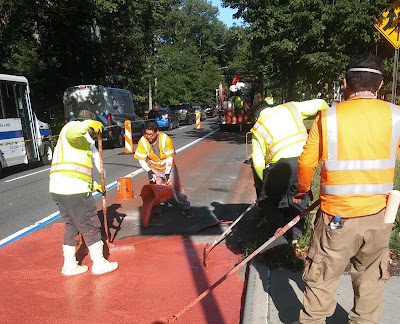 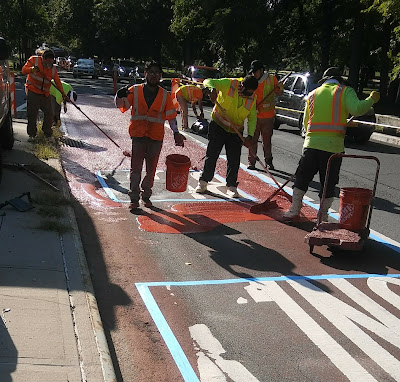 Above - This worker has to go back to get another bucket of paint to spread out on the lane as the paint he poured out is spread across the lane.

Below - The paint is then rolled out carefully as not to cover the taped off area in the lane marked 'Bus Lane Only'. 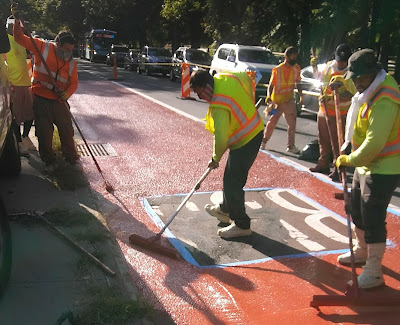