An Update from State Comptroller DiNapoli: NY's Economy & Finances in the COVID-19 Era

While all states have lost employment since the COVID-19 pandemic struck earlier this year, New York surpasses almost every other in both number and percentage of job losses. From February through August 2020, the Empire State ranks second to Hawaii in percentage of employment decline and second only to California in the total number (see map below). During that same period, unemployment in the State rose from 3.7 percent to 12.5 percent, based on preliminary estimates. 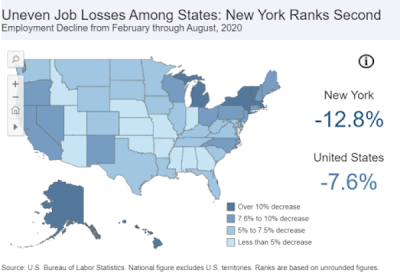 Employment in New York increased from May through August. However, those gains, over 686,000 jobs, represented only 35 percent of the record-breaking loss of 1.9 million in March and April. As the Office of the State Comptroller has reported previously, New York’s job losses are concentrated in lower-paid sectors of the economy.The employment impact on New York and other indicators, including figures on overall economic activity, continue to support the case for significant additional federal aid in response to the pandemic and the associated recession.

For more current highlights on the impact of the COVID-19 pandemic on the State’s finances and economy, visit our web page. Additional topics this week include:

The State Comptroller's office is committed to keeping New Yorkers regularly updated on the State's economy and finances.