Assemblywoman Nathalia Fernandez announced her decision to run for Bronx Borough President in September two months before the general election in November. Was she taking the 2020 November election for granted having handily defeating her opponent in the November 2018 election? In the Bronx it is the Democratic Primary which is the real race you have to win to be elected, that could be up to now.

The decision by Assemblywoman Fernandez made some people unhappy because there was still a challenger to her in the November election, one who was a community leader, and a former opponent in the special election for the 80th A.D., Mr. Gene De Francis. The 2020 November election also has a strong challenger to Congresswoman Alexandria Ocasio-Cortez, Mr. John Cummings who is aligned with Gene De Francis, and will benefit him in the East Side of the district which accounts for about eighty percent of the vote. The twenty percent on the West Side of the 80th A.D. (split by the Bronx River Parkway) now becomes important in the 2020 general election.

I was able to get the exclusive story of a meeting between Mr. Anthony Rivieccio head of the West Side Northwest Bronx Democrats and candidate Gene De Francis. There were concern that while campaigning for borough president the 80th A.D. would suffer from a lack of coverage by its elected official, what might happen to the district should Ms. Fernandez become the new borough president, and many of the problems that currently exist in the 80th A.D. I was told that this was not the first conversation between the two, but that it was the culmination of discussions between them for the support of the Gene De Francis candidacy for the 80th A.D. Mr. Rivieccio went on to say that he wishes Nathalia Fernandez all the best in her race for Bronx Borough President. He added that this decision is in no way connected to the exploratory committee that has been set up by the club to look at candidates for the 2022 races for assembly and party positions in the 80th A.D. 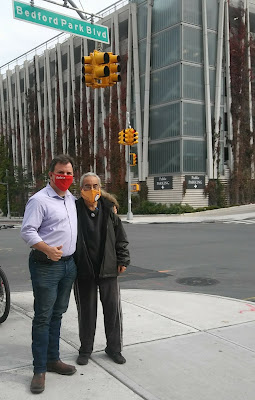 80th A.D candidate Gene De Francis with a thumbs up to the announcement by Anthony Rivieccio that the Northwest Bronx Democrats are supporting him for Assembly in the November general election. The photo was taken at the corner of Bedford Park Blvd. and Webster Avenue across from the Bronx Botanical Garden garage.