After a new crosswalk speed bump to protect pedestrians at the intersection of East Tremont Avenue and Miles Avenue was installed by the NYC Department of Transportation, the Bronx DOT has removed the double yellow medium and any lane markings to put a Bike lane on East Tremont Avenue from the Cross Bronx Expressway to Harding Avenue. The planned bike lane was put on hold after Councilman Mark Gjonaj took action because there was no notification to the community about the proposed bike lane.

Many merchants and homeowners complained to Councilman Gjonaj that having a bike lane would create a problem with deliveries to the stores by their suppliers, and shoppers picking up merchandise from the stores on East Tremont Avenue there. Anyone who parks in a bike lane is subject to a summons with a hefty fine of $115.00. By taking away a lane of traffic on the commercial street more traffic then travels on adjacent local streets. That has become the problem with the Morris Park bike lane, where more traffic is now using Rhinelander Avenue which is causing many accidents now at intersections on Rhinelander Avenue.

One problem with the Bronx DOT bike lane plan is that it appears that the bike lanes are being put in commercial districts where cars and trucks double park. NYC Traffic Rules S4.12(c) states No stopping, standing, or parking in bike lanes. Crossing a bike lane is prohibited except when turning, leaving a parking space, driveway, or avoiding an obstacle. Yield to bicyclists and pedestrians. Watch out for cyclist and pedestrians when turning and opening vehicle doors. Trucks making deliveries are to watch for cyclists when loading and unloading along the bike lane, and where permitted, double park on the roadway side of the bike lane, not in it. Bicyclist must ride in the bike lane whenever provided (except when turning or avoiding an obstacle). Follow all traffic signals, markings, and other rules of the road. Ride in the direction of traffic. Yield to pedestrian. Cyclists age 14 and over must ride in the street. Keep both hands on the handlebars for maximum control.

The main problem with Bronx bike lanes is that unlike the continuous trails outside of New York City, here in the Bronx bike lanes are placed on streets for a certain amount of distance that end as quick as they appear with no pattern of any trail of continuous riding. Bike lanes are placed on busy commercial streets which drivers avoid, thus causing more accidents on the streets that are chosen as alternatives. 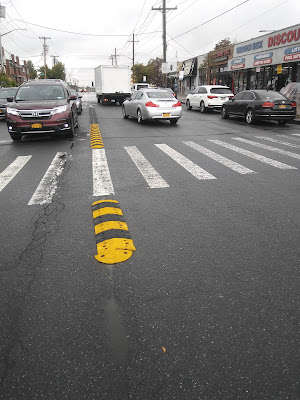 Above - The new NYCDOT speed bump being placed at various intersections to protect pedestrians crossing the street.

Below - The yellow medium has been removed creating a hazardous driving condition. 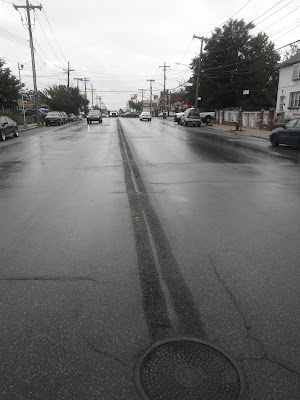 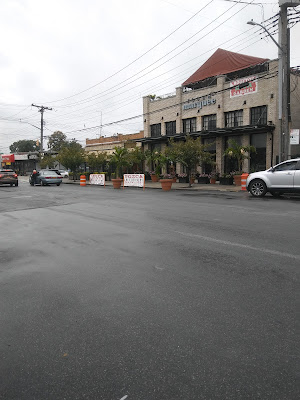 Above- This restaurant has taken advantage of the Open Streets Program which may interfere with the bike lane.

Below - How the bike lane will effect fire engine response time must be taken into consideration. There was no comment from the fire house. 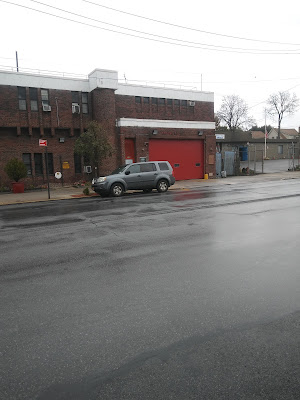