125 Days and Counting - I will Take no Questions From That Reporter From the Bronx Chronicle, Because I Can't Answer Them. 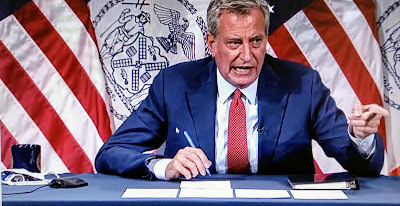 A conversation between Mayor Bill de Blasio and the moderator of his morning media briefings.

I made sure I only take questions from eight reporters, and you know who my favorites are. You can put in one question at the end from reporters who are not my favorites, but make sure you do not put Robert Press from the Bronx Chronicle through to me. He asks me questions like why am I going against my Department of Homeless policy of not putting more than 25% single adult males into a community board's responsibility. I am putting 400 single adult males into Bronx Community Board 11, even if it will be over 60% of that boards homeless responsibility. I told him ever since that new No Cash Bail Law was passed They were all let out of Rikers Island, and we have no place for those who were homeless.

He beats me up on other issues like NYCHA. He was the first to ask me why residents in Nycha buildings have to wait over five years for replacement stoves and refrigerators. I couldn't answer him and said it was the state and federal government' fault, blaming it on President Trump who is no longer in office. He asked me why Bronx public school children are far behind the children in the other four boroughs then I brought in Chancellor Richard Carranza. He couldn't fix it and quit, and I was lucky I could blame it on the pandemic now. He also kept beating me up on crime stats in the Bronx.

I don't want you to take any questions from Robert Press of the Bronx Chronicle, because I can't answer them. He will probably ask me about the new Delta plus and other COVID variant that is coming to your Thanksgiving dinner table from South Africa that we haven't found a name for. I have four months left, and I don't want to take any questions from that reporter. Let Eric Adams try to answer his questions, I can't.