In This Issue
REMINDER
Save the Date:
Wednesday,
October 13
at 11 am Highbridge
10 years with the UWFP
Details to finalize end of  month due to COVID protocol.
Hi,

These are strange and busy times.  We are in exciting times to advocate for change.  Here are a few things we started to work on during the summer.  We plan on continuing.
Hope to see you soon,
Karen A.
Tibbetts Brook Daylighted Itself in Ida Remnants 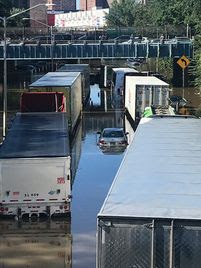 September 1, 2021’s Tropical Storm “Ida” Remnant was a massive event in New York City that caused tremendous harm to Van Cortlandt Park Lake. The rain overflooded the Lake’s edge, clogged and supercharged the overflow sewer (or weir), and otherwise flooded a large swarth of the lower part of the park, which remains closed days later. In turn, as water sought the lowest point, it routed along the Old Putnam Rail Trail — which is estimated to have flooded as far as West 225th Street. The water overflowed the wall of the Major Deegan, halting car and trucks in place, and closing I-87 thereby disrupting the traffic and lives of Bronxites for days.
. . . read more at Link to Tibbetts Brook Daylighting blog
The Road to Bronx Environmental Justice is in the Data
Bronx Council for Environmental Quality (BCEQ) completed a research project on Environmental Determinants of Health, Wealth, and Education in the Bronx, conducted in partnership with Columbia University and with Lehman College, a Hispanic-serving institution in the Bronx. A team of Columbia and Lehman undergraduate students used sophisticated data visualization techniques to explore correlations among statistical measures of public school dropout rates, income, and health disparities with environmental factors.

The completed report, Environmental Determinants of Health, Wealth, and Education in the Bronx, is a call to action to save Bronxites from the impacts of bad environmental policy through budgeting and planning.  To complete the research, BCEQ Board Members met weekly with a research t
eam of Kayla Bernard (Lehman, BA Sociology), Gabriel Agustin Fernandez (Columbia, Math/CS), Ashe Lewis (Barnard), and Eusebia Vazquez (Lehman), and led by Zi Fang (Columbia, Masters in Statistics).  Students utilized ESRI datasets, ArcGIS, QGIS, Census figures, New Yorkers for Parks Report, as well as city and state agency databases.   Findings include:
. . . read more at Link the Road to EJ in the Bronx
Renewable Energy is coming to New York City
As Bronx residents, members of Bronx organizations, and/or advocates for environmental justice, we are writing to ensure that our voice and concerns about the NYSERDA Tier 4 project are heard. ....t the Tier 4 process so far has been guided by private companies, with no public participation for the neighborhoods impacted by the construction of renewable energy installations – many of which are EJ communities.
Posted by 100PercentBronx at 7:57 AM