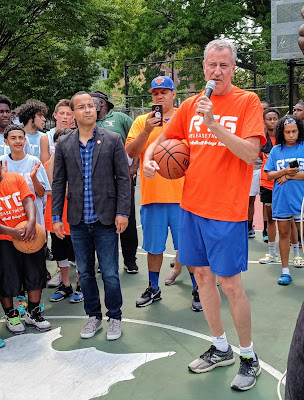 Mayor Bill de Blasio today signed an emergency order to execute the Emergency Rikers Relief Plan, a five-point plan to address challenges on Rikers Island. In addition to the plan of City actions, the Mayor also called for action across the justice system, including immediately calendaring 500 court cases and enacting the Less is More Act.
“New York City will take any action necessary to keep everyone safe throughout the justice system. These reforms will do just that – both by taking immediate steps to put officers back on duty, and by making deeper reforms to reduce the number of incarcerated New Yorkers,” said Mayor Bill de Blasio. “We will uphold our obligation to provide a safe, clean environment on Rikers Island while pivoting to a fairer and more humane justice system.”
The mayor’s five-point plan includes:
The mayor also called for actions across the justice system in the following areas:
Posted by 100PercentBronx at 12:47 PM