With the first day of in person school over, the Van Nest Neighborhood Alliance held its first in person meeting in over a year. The agenda was getting to know the new councilman for the 15th City Council District Oswald Feliz, and the councilman's challenger in the November election Ariel Rivera.

VNNA Chair Bernadette Ferrera opened the meeting by welcoming everyone back to the first in person meeting in over a year, She introduced her Executive Board sitting up front, and then introduced Assemblywoman Nathalia Fernandez. Assemblywoman Fernandez gave a review of what went on in the recent special session of the legislature called by new Governor Kathy Hochul. She said that the eviction moratorium has been extended to January 15, 2022, and if tenants need help to get Rent Relief her office her office will work to get the needed help. Her office is open Tuesday, Wednesday, and Thursday, and the office is open remotely on Monday and Friday. If anyone needs help with Flood problems they should call Mr. Jerome Williams of FEMA at 256-454-6461. She also mentioned that she will be taking part in a clean up with the Friends of Pelham Parkway on September 25th from 2 - 4 PM on the South Parkway at Wallace Avenue. She ended by saying that the state owes Nine Billion Dollars to the federal government for loans given to the state.

Incumbent 15th City Councilman Oswald Feliz was next to talk about his short tenure in the council. Councilman Feliz said that he was first elected in a special election that took place in March, but because of Rank Choice voting the results were not official until one month later in April. He said that he has brought fifteen million dollars to the district already, 4.5 million for NYCHA upgrades, 4 million for schools, and 4 million for parks. He added that the mayor has committed to .5 million dollars to renovate Poe Park to add more green space, and get rid of asphalt and concrete. Also he expects from the speaker 3.5 million to redesign the MS 45 playground. He then spoke of a garbage problem in the district, putting cameras where the illegal dumping is going on, he continued funding to the Wildcat clean up crew, and that some newer state laws need to be modified.

Councilman Feliz's opponent in November spoke next, introducing himself. Ariel Rivera said that he is twenty-two years old, ran for assembly at age eighteen, and currently works at the Board of Elections. He spoke of a housing crisis, and that he wants to use more section 8 vouchers in the NYCHA buildings. Hazel Nura then spoke about NIDC, a housing advocacy organization which helps not only tennants, but landlords oust bad tenants. A representative from Assemblywoman Karines Reyes spoke, and it was said that October 23rd will be the Annual Van Nest Fall Festival in Van Nest Park from 12 - 4 PM. The meeting was then adjourned. 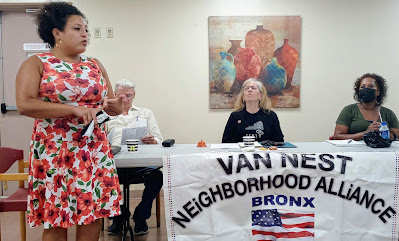