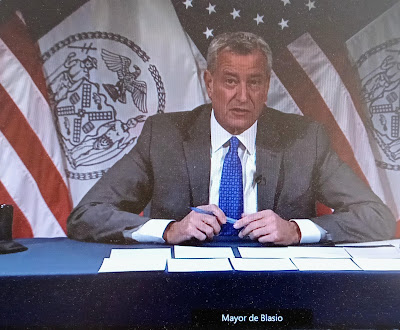 What was that question,
Question: I wanted to ask you about the DOI report on your police detail. You know, in past responses, you've talked about, a lot about the security of your family and how important that is to you, how that’s a priority. And I wanted to just shift from that focus to an incident in February of 2021 in which the DOI reported, you asked the detail to take a guest at Gracie across town to the Upper West Side? And so, I was wondering why didn't you guys just ask for a cab or an Uber? And can you talk about, I mean, this is the sort of thing I think that, you know, erodes trust. I mean, does that kind of factor in at all? I mean, do you kind of feel like that's kind of a bad look in hindsight now?
Mayor: First of all, what I try to do every, literally every day for eight years, was do what was appropriate. Do what I understood to be the right thing to do, follow the guidance I was given. And I tried to make decisions in the interest of the people. And I don't think it erodes trust, if I thought, for example, if someone had come for an interview for a job in New York City, this I know is an example, came for a job interview. We wanted someone to come join us in public service. And did them the courtesy of dropping them off where they were staying. I think that's a professional courtesy. It's in the public's interest because it's about showing someone we value them and we want them to come join us. That's the kind of example. I just think that's appropriate given the mission of getting the very best people to serve New York City.
You reporters seem to be trying to kill any chance of me becoming governor. Who is paying you to do this, Kathy Hochul?