The rain held off just long enough for the 1st Allerton Avenue Hip Hop Festival to end. There was rapping, song, and dancing on Allerton Avenue, and a mural unveiled to honor DJ Jazzy Jay, at the place where his career in Hip Hop took off at 759 Allerton Avenue.

A stage was set up on Allerton Avenue where performances ran for hours with Famous Hip Hop Artist after Hip Hop Artist paying tribute to DJ Jazzy Jay. Proclamations from Bronx Borough President Ruben Diaz Jr. and Councilman Mark Gjonaj were given to DJ Jazzy Jay. The event was put together by Ms. Grace Lovag, Irene Estrada, Al Pizzaro, and others. 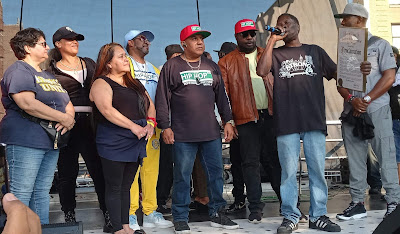 A group photo of Hip Hop Artists, and the people who helped put this event together.

Al Pizzaro, Steve Cas painter of the mural of DJ Jazzy Jay behind the group, Grace Lovag, Irene Estrada, and some Hip Hop friends of DJ Jazzy Jay standing right under his thumb in the mural.

The mural of DJ Jazzy Jay from artist Steve Cas. 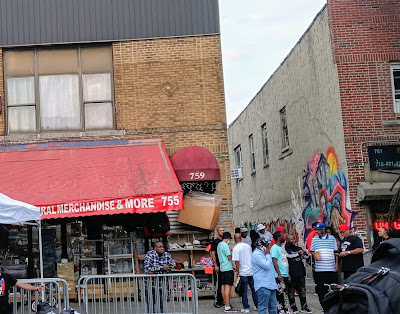 759 the place where it all started upstairs, and the mural tribute to DJ Jazzy Jay right next door.
Posted by 100PercentBronx at 9:52 PM