The Bronx Youth Empowerment Program held an anti gun/violence rally at the corner of Bronxwood Avenue and East 213th Street where there was a random shooting last weekend. There has also been an uptick in youth violence in the area.

The rally included former Councilman Andy King, Pastor J. Gooding of the 47th Pct. Clergy Coalition, Marion 'Tiny' Frampton of 'The Black Spades, Victor Rodriguez, President Bronx YEP, Abigail Maldonado 47th Precinct Explorers, Frank Lewis of 'Guns Down Life Up', who spoke. There were over seventy-five concerned youth and residents who yelled we want to live, then all marched around the corner where the shooting occurred luckily with no injuries. Marchers yelled "we want to take back our corner", and during the march police from the 47th Precinct stopped all traffic.

Former Councilman Andy King makes sure everyone is in the right place for the press conference.

Pastor J, Gooding would speak first, as Councilman King would hold up an enlarged photo of the random shooting.

YEOP President Victor Rodriguez spoke for the many members of the Bronx YEP of the rise in shootings and youth violence.

Councilman Andy King asked for help in finding the shooter in the photo. 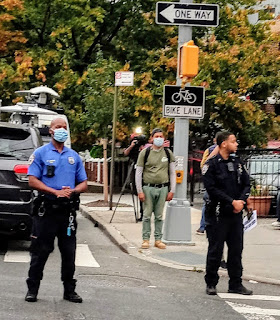 The community Affairs officer from the 47th Precinct would say that the police had no leads on who the shooter was.

After the speeches it was time to take the cornerback, as about seventy-five people marched around the corner three times while the police stopped traffic on Bronxwood Avenue and East 213th Street.
Posted by 100PercentBronx at 7:36 AM