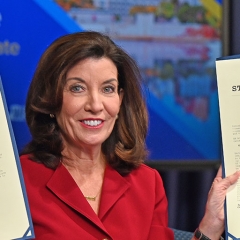 Legislation (S.1150-A/A.1228-A) Requires Documents to Be Discussed at Open Meetings to Be Made Available At Least 24 Hours Prior to Meeting

Legislation (S.4625-A/A.1442-B) Requires MTA to Publish its Data in Open Data Formats that Can Be Easily Accessed and Downloaded by the Public

Governor Kathy Hochul today signed two pieces of legislation boosting transparency in state and local government. The first piece of legislation requires documents that are going to be discussed at open meetings to be made available on request or posted on the government's website at least 24 hours prior to the meeting. The second piece of legislation requires the MTA to publish its data in formats that are easily accessible and can be easily downloaded and used by the public.

"There's no excuse for keeping New Yorkers in the dark on the actions governments take to help their constituents, and we've been committed to greater transparency since Day One," Governor Hochul said. "These pieces of legislation will require important local government documents and MTA data to be properly available for constituents to read and utilize. New Yorkers should be informed about the work government does for them every day, but we have to make it easier for them to get that information."

This legislation makes documents to be discussed at open meetings available to the public at least 24 hours in advance of the meeting. The Open Meetings Law is intended to empower the public through the accessibility of meetings of public bodies. The law requires them to make available to the public relevant documents, such as any proposed rule, regulation, or resolution. However, the current law only requires documents to be made available prior to meetings "as determined by the agency or department." This standard has resulted in some government bodies failing to make materials available in advance of meetings, reducing transparency. This legislation requires any proposed resolution, law, rule, regulation, policy, or amendment to be made available upon request and to be posted to the body's website at least 24 hours in advance of their discussion at an open meeting, giving the public access to these important documents in advance.

This legislation requires the MTA to publish its data in open data formats, which can be easily accessed, downloaded and manipulated by the public. The MTA will have to designate a data coordinator and will have 180 days to publish as much of its data as is feasible and legal within three years. This bill codifies Executive Order No. 95 of 2013, "Using Technology to Promote Transparency, Improve Government Performance and Enhance Citizen Engagement", into law.

Twenty-Four Hours is not enough time for public

review. It should be 72 hours.