Tuesday October 12th was the monthly meeting of the PPNA, and it was the second in person meeting drawing a large crowd. Over forty people were on hand to hear and question, Department of Sanitation Citywide Community Affairs Officer Steven Caruso. Mr. Caruso explained what his job was, that being the information center for the DSNY, informing the public of DSNY policy, and attending Community meetings like this to get feedback for the DSNY.

Questions came in from all over the PPNA area, and were questions such as 'What happened to the trash baskets that were on the street corners'? Mr. Caruso answered that question by saying that household garbage was being thrown into the waste baskets which are made for individual pieces of trash, not bags of household garbage. He said where that problem began, the trash can was removed. Another Question to him was about reducing Alternate Side of the street parking on commercial streets from six days a week to three days a week. Mr. Caruso said that it is the community board's responsibility to request that, and the matter was turned over to a member of Community Board 11's Traffic and Transportation committee who was in attendance since it is the DOT who is in charge of street signs.

Also at the meeting were the NCO officers for Sector B, with their new NCO Sergeant for the 49th precinct, and representatives of Councilman Mark Gjonaj, and Assemblywoman Fernandez. 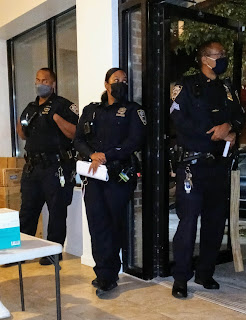 A view of the crowd at the October PPNA meeting.