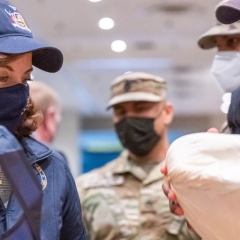 Over $100,000 in Generous Donations Went Toward Turkeys for New Yorkers

A List of Feeding NYS Food Banks is Available Here

Governor Kathy Hochul today announced 3,200 turkeys will be distributed throughout every region of New York State thanks to donations and a partnership with Feeding New York State.

"The pandemic has brought unprecedented hardship onto so many New York families. I'm proud to have recently made the Nourish New York program permanent to battle food insecurity and we are thankful to the kindness of corporations statewide and Feeding NYS for working with us to ensure 3,200 households will have turkeys on their tables this Thanksgiving holiday," Governor Hochul said. "As New Yorkers gather together with their families for Thanksgiving, I encourage everyone to please get vaccinated if you haven't already and get the booster shot for an extra layer of defense against COVID. This is an important way to keep yourself and loved ones protected from this deadly virus."

This year's turkey distribution is possible because of the generosity of corporations across New York State including Amazon.com, Inc., The Coca-Cola Company, Liberty Coca-Cola Beverages, Golub Family Foundation, UJA-Federation of New York, China General Chamber of Commerce, MetLife, and Geico.

Feeding NYS is leading the way on a unified effort for a hunger-free New York State. Feeding NYS supports the ten food banks of New York State by managing statewide grants, they source food for the food banks, partner with farmers and the food industry to encourage donations, educate the public on hunger issues, among other actions. Learn more about Feeding NYS and their work here.

This announcement comes days after Governor Hochul signed legislation codifying Nourish New York into law. The Nourish New York initiative reroutes New York's surplus agricultural products to the populations who need them most through the state's food banks. Through three rounds of the program, New York's food banks have purchased over 35 million pounds of New York food products, which equates to 29,800,000 meals. In this fourth round, to date, New York's food banks have purchased 6,903,366 pounds of food, creating an additional 5,752,805 meals for households in need. A total of $85 million has been committed to Nourish NY since its launch in May 2020. Nourish NY food purchases have positively impacted 4,178 businesses across the state.