The reason for Morris Park having two assembly members happened in the last redistricting of 2011, where after the 2010 census the 82nd Assembly District came up to Morris Park Avenue at certain blocks taking area from the 80th Assembly District. It is hoped that now after the 2020 census that the area taken away from the 80th A.D. will be returned. Rabbi Pewzner officiated at this menorah lighting which used a flame to light oil in oil lamps to resemble the first Chanukah.

Rabbi Pewzner gave a brief history of the holiday of Chanukah. 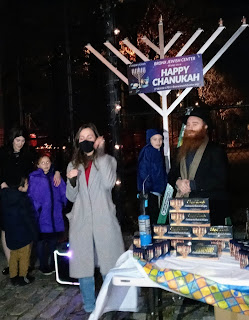 State Senator Alessandra Biaggi spoke about how the holiday season brings all people together to understand each other's holidays. 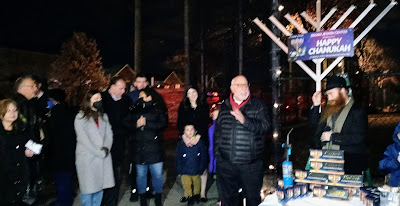 Assemblyman Michael Benedetto said a few words of what the holiday of Chanukah means to him. 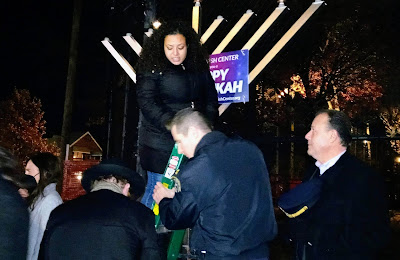 Assemblywoman Fernandez was drafted to go up the ;adder and light the middle oil lamp with the flame. Deputy Inspector Natiw held the ladder steady. 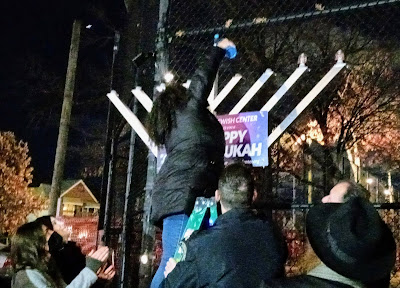 She said she used her ballerina training to light the oil lamp, and cover it all in one swift move. 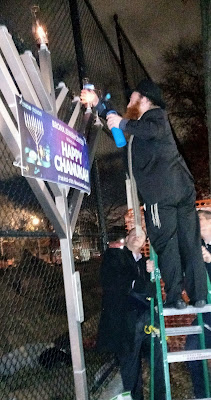 Rabbi Pwzner would light the two other oil lamps and cover them to keep the flame lit, as he said the Chanukah prayer.