9 Days and Counting - To shoot or Not to Shoot 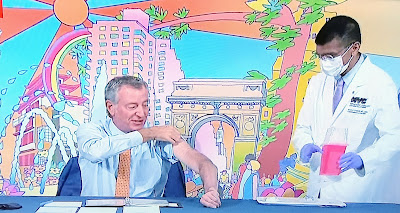 Mayor Bill de Blasio to Doctor Chokshi: I am rolling up my sleeve for another booster shot so I can get $100.00 that I can put into my campaign for governor.

Doctor Chokshi to Mayor de Blasio: Mayor de Blasio it is to early for you to get another booster shot. You have to wait six months after your last vaccination.

Mayor de Blasio to Dr. Chokshi: Just give me a placebo to make it look like I got another booster, so I can panic the citizens of the city that they are going to need a fourth booster shot, and I can get a larger campaign check from the drug makers.

Doctor Chokshi to Mayor de Blasio: But that would be wrong, and go against the oath of Medicine I took.

Mayor de Blasio to Dr. Chokhi: Mayor Adams is getting rid of you in March, so if you don't give me the shot you can pack your bags right now.

I need something I can get on Governor Hochul, and this is just the thing, how she botched Omicron, and that will give ne smooth sailing to the Governor's Mansion.