Tuesday Evening after the Community Board 7 Christmas Tree lighting, I was able to make it to the Allerton Triangle, where just On Saturday the Menorah was lit by Rabbi Pewzner. With the menorah still on site and all lights lit in the background, the Allerton Avenue Triangle Christmas Tree was lit.

This event was sponsored by the Allerton International Merchants. Santa Claus brought along Mrs. Claus as they came by car rather than reindeer. 80th Assembly District Democratic Female District Leader Irene Estrada brought toys to give out to the children. To warm up the people, delicious hot chocolate was also served. 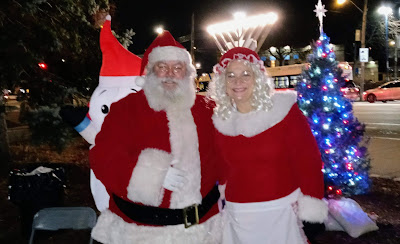 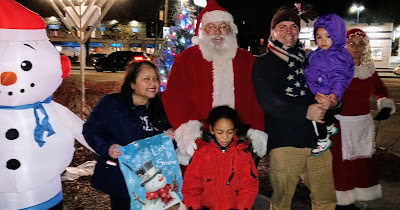 A group photo of many of the visitors to the Allerton Triangle to see the Christmas Tree and receive a gift from Santa Claus.
Posted by 100PercentBronx at 12:47 AM