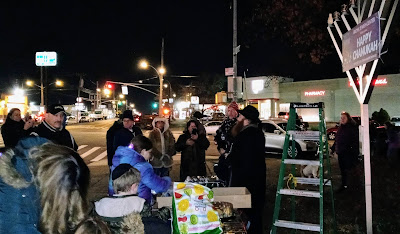 Rabbi Pewzner of the Bronx Jewish Center stopped by the Allerton Triangle where Allerton Avenue, Bronxwood Avenue, and Boston Road intersect to light the Allerton Menorah Saturday night. Before going up the ladder to light seven oil lamps for the seventh of eight nights of the holiday of Chanukah the history of Chanukah was explained by the Rabbi.

Gene De Francis president of the Allerton International Merchants Association lit the middle light that is used to light the other lamps (or in this case a propane torch was used). Rabbi Pewzner then went up the ladder to light the other seven oil lamps. 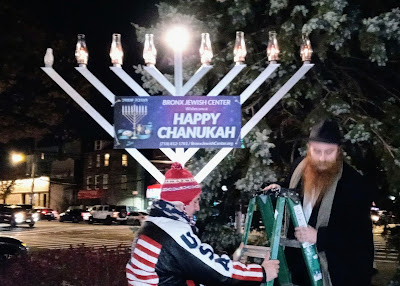 Rabbi Pewzner finishes lighting seven other oil lamps, leaving the far left and eighth oil lamp for the next night when all eight oil lamp are lit with the middle one.

Afterwards it was time to celebrate with potato latkes and jelly donuts, then dance as you see the photo. Community Board 11 member Kenneth Gelnick, Rabbi Pewzner, Gene De Francis, Steve Glosser, and others dance.

Most of the crowd who came to see the lighting of the Allerton Triangle Menorah.