What should have been a joyous occasion was turned into a political agenda by Community Board 7 District Manager Ischia Bravo. The Annual Christmas Tree lighting traditionally was run by officers of the board with board members and elected officials on stage. This year however the District Manager Ischia Bravo was in charge of the event which turned political. On the stage was the Male District leader candidate of the Assemblywoman Nathalia Fernandez's New Slate who was called to come on stage by Fernandez's incumbent State Committeewoman. It is rumored that the CB 7 District Manager Bravo will be the Female District Leader candidate on the Fernandez slate. The current District Leaders of Assemblywoman Fernandez have not been included in her district activities since defeating Fernandez's candidates in the 2020 primary, according to Irene Estrada Female District Leader for the 80th Assembly District.

When I asked the Community Board 7 District Manager why this non CB 7 board member and non elected official was on the stage the District Manager said "Are you harassing me, I want you to leave, or I will call the police to remove you". I took a few more photos and then left on my own accord. I have asked the Bronx Borough President's office to investigate this matter and respond back to me. This reminded me of when the Bronx Borough President's office asked me to cover what was to be the removal of CB 9 District Manager Federico Perez. DM Perez was using district resources for his Bronx Puerto Rican Day Parade, and was fined by the Conflict of Interest Board for doing so. The first attempt at removing DM Perez failed. A new board chair was voted in who got a vote removing DM Perez, who this new chair then became the next District Manager.

As Fredrick Klein of Assemblyman Dinowitz's office speaks in place of the assemblyman the non board member or elected official (circled), but Male District Leader on the 2022 Assemblywoman Fernandez slate stands on stage next to the State Committeewoman (in a white jacket) who invited him up. CB 7 DM Bravo is at the far left, with blonde hair.

In this photo This non CB 7 board member or elected official (circled again), but Male District Leader on the 2022 Assemblywoman Fernandez slate, stands next to the Assemblywoman, with the Female State Committeewoman on her other side. CB 7 DM Bravo is 4th from the left with blonde hair. 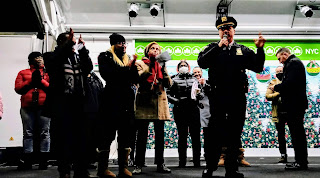 New 52nd Precinct commanding officer Jeremy Schoublin who was welcomed to the community, says thank you.

Explorers from the 52nd Precinct gave out hot chocolate on the cool night.
Posted by 100PercentBronx at 12:01 AM