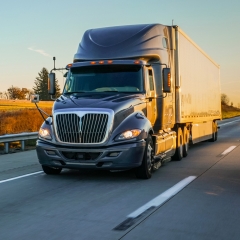 Governor Kathy Hochul today announced a significant milestone in the reduction of harmful truck emissions with the final adoption of New York's Advanced Clean Truck Rule. The regulations, first proposed during the Governor's commemoration of Climate Week in September, will be instrumental in helping the State achieve the ambitious targets of the Climate Leadership and Community Protection Act (CLCPA) by phasing in the sales and use of zero-emission trucks and will reduce their harmful pollutants, which disproportionately impact the health and well-being of disadvantaged communities.

"New York continues to lead the nation in tackling the climate crisis, taking bold steps to end our reliance on fossil fuels and transition to clean energy," Governor Hochul said. "The regulations we are adopting will help us cut pollution and emissions, kick-start the shift to clean electric trucks, and address the environmental injustices that have plagued too many communities across our state."

The new Advanced Clean Trucks (ACT) rule finalized by the State Department of Environmental Conservation (DEC) requires manufacturers of vehicles greater than 8,500 pounds to sell an increasing number of zero-emission vehicles (ZEVs) in New York State.  The regulation complements New York's recently adopted legislation that established a goal for 100 percent of medium- and heavy-duty vehicles offered for sale or lease, or sold, or leased, for registration in the State be zero-emission by 2045, where feasible. The ACT regulation will also result in substantial reductions of particulates, nitrogen oxides, and toxic pollutant emissions in disadvantaged communities that have been disproportionally impacted by diesel truck pollution.

DEC Commissioner Basil Seggos said, "This past year, we have made incredible progress in implementing the requirements of the CLCPA and in taking real action to reduce the emissions driving climate change's impacts and 2022 is off to a great start with the finalization of this regulation. It is a testament to the commitment the Governor is showing to achieving our climate goals and our ongoing work to help drastically reduce the pollution created by medium- and heavy-duty trucks on roadways across the State."

New York was a signatory to a Multi-State ZEV Memorandum of Understanding in July 2020 establishing a commitment to work collaboratively together to advance and accelerate the market for electric medium- and heavy-duty vehicles, including large pickup trucks and vans, delivery trucks, box trucks, school and transit buses, and long-haul delivery trucks. New York joins California, New Jersey, Washington, and Oregon in adopting the ACT.

State Department of Transportation Commissioner Marie Therese Dominguez said, "Today's announcement underscores the important role that the transportation sector plays in reducing greenhouse emissions and will help  support a healthier and safer environment for all New Yorkers. This bold action by Governor Hochul further demonstrates New York State's status as a global leader in the fight against climate change.

President and CEO of NYSERDA Doreen M. Harris said, "As New York State works to decarbonize our economy and lower greenhouse gases, it is exciting to see zero emission truck regulations coming to fruition as part of our work to combat climate change. Together with the private sector, local communities, and consumers, we are charting a pathway to a brighter future that offers cleaner air and healthier communities for all New Yorkers."

Adoption of ACT is instrumental to meeting the requirement of the New York's Climate Leadership and Community Protection Act (CLCPA) to reduce greenhouse gas (GHG) emissions by 85 percent by 2050 in the State. The regulation will drive an increase in the number of medium- and heavy-duty ZEV models available as purchase options for medium- and heavy-duty vehicle purchasers and fleets. ACT provides the needed regulatory certainty to support a stable market for long-term vehicle purchasing decisions and the development of medium-and heavy-duty ZEV charging infrastructure, including the potential for hydrogen refueling.

The full regulation is available at https://www.dec.ny.gov/regulations/propregulations.html#recent

To support the decarbonization of the transportation sector, New York State has already implemented several key programs to accelerate the transition to zero-emission medium- and heavy-duty trucks, including incentives provided through the New York Truck Voucher Incentive Program and the New York City Clean Trucks Program, utility-based fleet assessment services, a $15 million medium- and heavy-duty Make-Ready Pilot program, and a $24 million Electric Truck and Bus Challenge Prize competition. New York State agencies and authorities will seek federal funding provided through the federal Infrastructure Investment and Jobs Act (IIJA) to promote development of medium and heavy-duty ZEV infrastructure in New York State, including consideration for disadvantaged communities and rural applications. In addition, DEC and the New York State Energy Research Development Authority (NYSERDA) will consult other State agencies to further develop and expand incentive initiatives as part of a zero-emission vehicle market development strategy required by the recently adopted law. That process will be completed no later than January 2023, well in advance of the sale of model year 2025 vehicles covered by DEC's ACT regulation.

The regulation also establishes a one-time large entity fleet reporting requirement. Subject medium and heavy-duty fleets will be required to submit a one-time report to DEC by April 1, 2023.  Reported information will help identify future strategies to accelerate the adoption of zero-emission medium- and heavy-duty vehicles.

New York State's nation-leading climate agenda is the most aggressive climate and clean energy initiative in the nation, calling for an orderly and just transition to clean energy that creates jobs and continues fostering a green economy as New York State recovers from the COVID-19 pandemic. Enshrined into law through the Climate Leadership and Community Protection Act, New York is on a path to achieve its mandated goal of a zero-emission electricity sector by 2040, including 70 percent renewable energy generation by 2030, and to reach economy wide carbon neutrality. It builds on New York's unprecedented investments to ramp-up clean energy including over $33 billion in 102 large-scale renewable and transmission projects across the state, $6.8 billion to reduce buildings emissions, $1.8 billion to scale up solar, more than $1 billion for clean transportation initiatives, and over $1.6 billion in NY Green Bank commitments. Combined, these investments are supporting nearly 158,000 jobs in New York's clean energy sector in 2020, a 2,100 percent growth in the distributed solar sector since 2011 and a commitment to develop 9,000 megawatts of offshore wind by 2035. Under the Climate Act, New York will build on this progress and reduce greenhouse gas emissions by 85 percent from 1990 levels by 2050, while ensuring that at least 35 percent with a goal of 40 percent of the benefits of clean energy investments are directed to disadvantaged communities, and advance progress towards the state's 2025 energy efficiency target of reducing on-site energy consumption by 185 trillion BTUs of end-use energy savings.