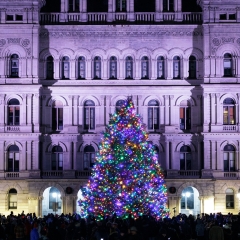 Governor Kathy Hochul today announced the completion of a LED lighting project throughout the buildings at Empire State Plaza that will allow the plaza to be dynamically colored on special occasions. The New York State Office of General Services (OGS) and the New York Power Authority (NYPA) have partnered to complete the installation of more than 360 exterior LED lights with new color-changing technology that will transform the plaza's unique architecture into visual celebrations throughout the year. The new energy efficient lighting will debut for the public later today at the Empire State Plaza annual holiday tree lighting ceremony at 5:15 p.m.

"I am happy to announce the completion of this exciting lighting display in the heart of our state capital, just in time for the tree lighting," Governor Hochul said. "The tree lighting and the larger completed lighting project are symbols of hope and optimism after a rough year and a half, and reflect our state's commitment to a greener, more efficient future."

The exterior lighting is part of a nearly $16 million comprehensive LED lighting project at the plaza scheduled to complete in 2023. NYPA, which is financing and implementing the project, is coordinating with OGS on the replacement of more than 95,000 lights throughout the buildings in the plaza with new LED fixtures. The initiative directly supports the state's commitment to a green Empire State Plaza and the goals of the Climate Leadership and Community Protection Act by increasing energy efficiency and annually reducing electricity demand by three percent—equivalent to 1.8 million New York households—by 2025.

OGS Acting Commissioner Jeanette Moy said, "This annual holiday festival at the Empire State Plaza is the perfect opportunity to unveil a new LED outdoor lighting system. It will reduce energy usage by at least 85 percent and illuminate the architecturally unique buildings at the Plaza in spectacular colors. The new lights will be a striking addition to the Albany skyline for this event and future special occasions. I am proud of what OGS and NYPA are accomplishing together to build a greener, more sustainable New York State."

NYPA Interim President and CEO Justin E. Driscoll said, "NYPA and OGS are implementing a comprehensive energy transformation at Empire State Plaza through the development of significant remote solar generation, energy efficiency and resiliency projects for the benefit of the complex and we are very pleased to complete the new LED lighting system in time for the annual tree lighting and holiday season. The lights have the capability of dynamically illuminating the buildings within the plaza to correspond with the variety of celebrations throughout the year."

In September 2019, NYPA and OGS completed an evaluation of energy options for Empire State Plaza through a series of technical reviews, community listening sessions, and meetings with neighborhood associations. The developed comprehensive plan, which includes the LED lighting upgrade, comprises these additional initiatives: