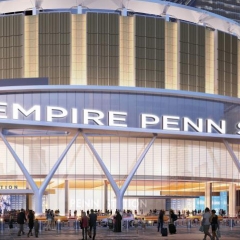 Project Will Provide Direct Metro-North Service from the Bronx, Westchester and Connecticut to Penn Station and Manhattan’s West Side

Governor Kathy Hochul today announced that the Metropolitan Transportation Authority (MTA) has approved a design-build contract for the Penn Station Access Project, which will provide direct Metro-North service from the Bronx, Westchester and Connecticut to Penn Station and Manhattan’s west side. Penn Station Access will drastically reduce travel times for people who live and work in the East Bronx, an area currently without any rail service. The contract will be awarded to Halmar International, LLC/RailWorks, J.V.

“Metro-North is coming to the east Bronx, and bringing faster commutes with it,” said Governor Hochul. “This one project by itself is a big step forward for environmental justice, environmentally sustainable transportation, the Bronx economy and regional interconnectivity, and yet another example of our ongoing efforts to make sure that all New Yorkers have the modernized transportation systems they deserve.”

There are almost 250,000 residents and over 100,000 jobs within a half mile of the four stations, which can have service as frequent as every 20 minutes in the peak period. The new service will save East Bronx riders up to approximately 50 minutes in each direction to Penn Station, and up to 75 minutes in each direction to Connecticut. Current New Haven Line riders with destinations on the west side will save up to 40 minutes per day since travel from Grand Central will not be necessary.

Governor Ned Lamont said, “Improved service on our rail system, with an eye on the future, means a transportation system that works for everyone when it comes to quality of life and economic development for residents and businesses in Connecticut and New York. It means more transit-oriented development, more people out and about, and more opportunities for tens of thousands of people to get to their jobs every day and earn a living. This is the latest joint venture between Connecticut and New York showing how important our relationship is for our residents and the success of the region.”

Catherine Rinaldi, President of MTA Metro-North Railroad said, “Access to Penn Station is completely transformative for Metro-North and we are excited to begin the service upon completion of the project. This will be the railroad’s largest expansion in history – four new stations is no small thing. This gives Metro-North’s busiest line a second route into Manhattan for the first time, redundancy that’s all the more important as the railroad looks to pursue major capital renewal projects on the route to Grand Central – namely the Park Avenue Viaduct and the Park Avenue Tunnel.”

The project also will improve regional transportation connectivity, enhance network resiliency by providing a second Metro-North terminal in Manhattan, promote sustainability and bridge communities. By using Amtrak’s existing Hell Gate Line, the project will maximize the potential of existing infrastructure, while minimizing impacts on the community.

It will bring the Hell Gate Line into a state of good repair and improve reliability and on-time performance for intercity passengers and prepare the corridor for high speed rail in the future. Amtrak will contribute $500 million toward the project, thanks to the efforts of Majority Leader Schumer. Amtrak has also agreed to pay the costs of delay if they fail to meet commitments to provide outages or workforce.

In addition to the four new stations, the project will turn the existing two-track railroad into a largely four-track railroad, with over 19 miles of new and rehabilitated track work. The project also includes four bridge rehabilitations, the reconfiguration of Metro-North's New Rochelle Yard, four new and one reconfigured interlockings, five new and two upgraded substations, and the modernization of signal, power and communication infrastructure.

The current project construction schedule is estimated at 63 months and $2.87 billion. It is estimated the project will create or retain approximately 4,500 direct jobs and another 10,000 indirect jobs.