The weather was cool, but not chilly Monday night at the Big White Cross at the intersection of Van Nest Avenue and Unionport Road. The Van Nest Community Alliance had cookies and hot chocolate for the parents and children as they gathered to see the traditional lighting of the Van Nest Christmas Tree and Nativity scene,

As they waited for the lighting, Christmas songs were sung. The tree and Nativity Scene then were lit, and the only thing left was for Santa Claus to come to wish everyone a Merry Christmas, and empty his sack of toys to the children on hand. 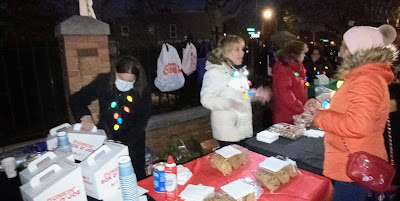 VNNA President Bernadette Ferrara stands behind dozens of assorted cookies as Cristina Tina Liannto pours a cup of hot chocolate for the woman in orange. 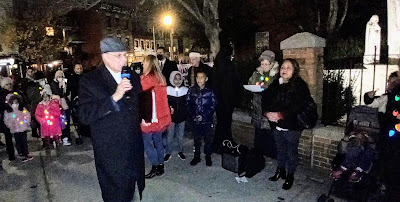 Father Robert Badillo of Saint Dominick's Parish welcomes everyone, and says a few words about the Christmas Holiday. 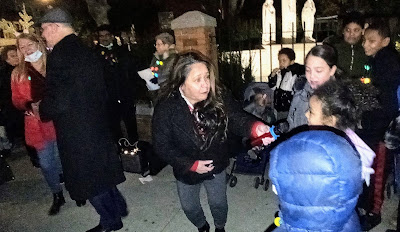 Christmas Songs were sung, as everyone waited for the Christmas tree and Nativity lighting. 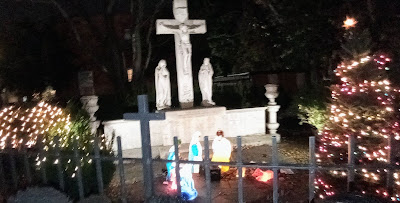 The Christmas tree and Nativity Scene was lit, then it was time for a group photo, and to wait for Santa.

A group photo of everyone but Santa. 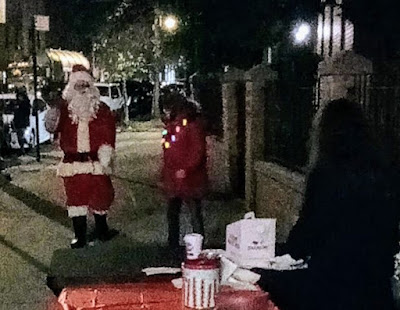 Santa was spotted around the corner where he parked his reindeer, and had his bag of toys over his shoulder. 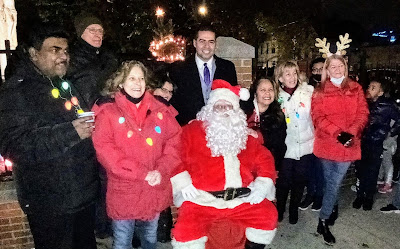 Santa had time to pose with the Executive Board of the VNNA, as his Reindeer Marion is next to VNNA President Ferrara, who is next to 80th Assembly District Female District Leader Irene Estrada. Next the children came up to receive a Christmas gift from Santa provided by the VNNA.
Posted by 100PercentBronx at 2:25 PM