Born in 1882 Fan Noli attended Harvard University, and was an advocate of an independent Albanian country from the Ottoman Empire. When Albania gained its independence he became a member of the Albanian Parliament, and became Prime Minister in July of 1924, only to be overthrown on Christmas Eve of the same year. Noli fled to Italy, winding up in America once again in 1932. He continued his studies in Boston, and went into music before retiring to Florida where he passed away in 1965 at the age of 83. Fan Noli is also known as the founder of the Albanian Orthodox Archdiocese in America, the St. George Albanian Orthodox Cathedral in Boston.

Co-naming the corner of Morris Park and Tenbroeck Avenues Fan Noli Way was passed in the City Council as presented by former Councilman Mark Gjonaj, and February 26th should have been the day the street co-naming took place. Because the official street sign was not in place due to a miscommunication many members of the Albanian community and others were very unhappy, but the street co-naming was moved to Saturday April 9th.

There was still a dark cloud over the street co-naming as rain had just stopped, and the clouds were still overhead, but the ceremony began with Church officials coming from Boston, and the Ambassador to the United Nations at this street co-naming for Fan Noli, an Albanian hero. New Councilwoman Marjorie Velazquez was welcomed by the Albanian community after a greeting in Albanian was heard. Others included U.S. Senator Chuck Schumer, Assemblyman Michael Benedetto, and former Councilman Mark Gjonaj along with almost two hundred community members mostly of Albanian descent to honor one of their own. 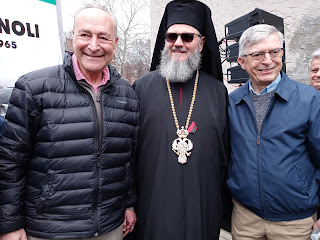 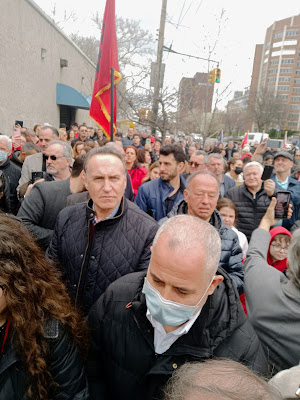 Part of the crowd of almost two-hundred people who are standing in front of what will be the new Albanian community center in Morris Park. 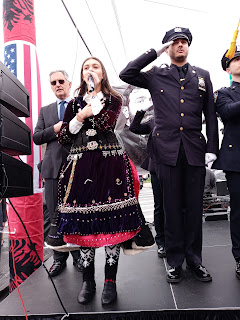 The U.S. and Albanian National Anthems were sung. 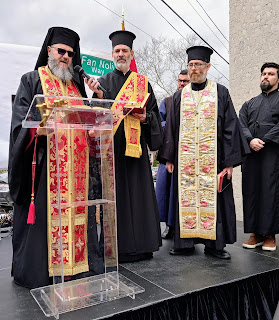 The church leaders from the St. George Albanian Orthodox Cathedral in Boston gave the invocation. 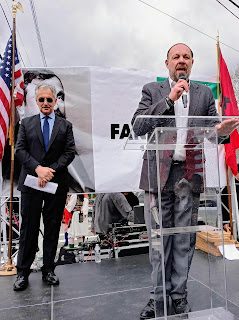 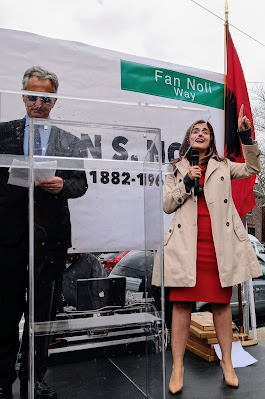 Councilwoman Marjorie Velazquez was greeted with cheers as she spoke. 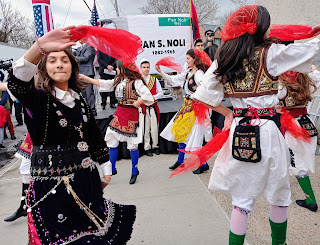 Traditional Albanian Dancers performed before the cover was taken off the new sign Fan Noli Way. 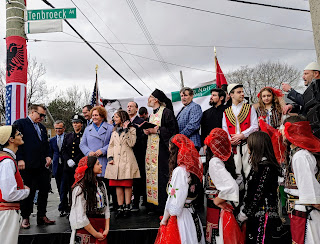 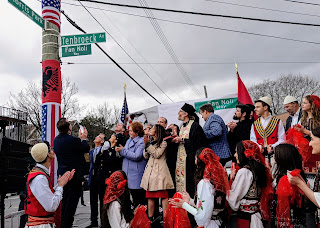 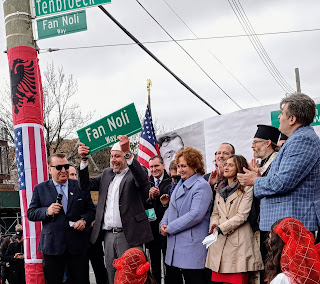 A proud Mark Gjonaj holds up the sign Fan Noli Way that was given to dignitaries  who attended the street co-Naming for Fan Noli Way.