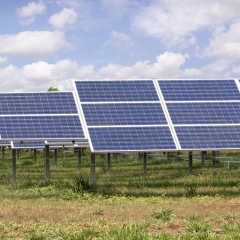 Governor Kathy Hochul, in advance of Earth Week, today announced that the State Public Service Commission has approved a new framework for the State to achieve at least 10 gigawatts of distributed solar by 2030, enough to annually power nearly 700,000 average-sized homes. The roadmap, submitted by the New York State Energy Research and Development Authority and the New York State Department of Public Service to the PSC, provides a comprehensive strategy to expand the state's successful NY-Sun initiative into one of the largest and most inclusive solar programs of its kind in the nation. Earth Week, which this year runs from April 18-22, is celebrated with events worldwide in support of the environment and to raise awareness for environmental protection and the care of our planet.

"The existential fight against climate change demands historic investments in renewable energy to bring us closer to a brighter, greener future," Governor Hochul said. "This roadmap to expand the NY-Sun initiative into a nation-leading blueprint for the development of distributed solar meets the moment to supercharge our economy and advance our climate goals."

The adopted framework includes an investment of $1.5 billion in ratepayer-funded incentives to extend the successful NY-Sun program and continue the marked reduction in project cost and incentives observed in the last 10 years. The public investment will spur approximately $4.4 billion in private investment to bring awarded projects to fruition, for a total of $5.9 billion in expected investment over the mid- to late-2020s. 6,000 additional solar jobs will be created across the state, including with the State's first application of prevailing wage requirements for solar projects between one and five megawatts.

The program expansion will also deliver at least 35 percent of the benefits, with a goal of 40 percent, from the investments to disadvantaged communities and low-to moderate- income New Yorkers. Today's announcement supports the State's Climate Leadership and Community Protection Act (Climate Act) mandate to generate 70 percent of the state's electricity from renewables by 2030 as part of a resilient and equitable transition to a clean energy economy.

The roadmap approved by the Commission and developed by DPS and NYSERDA carefully evaluated multiple strategies to deploy ten gigawatts or more of distributed solar by 2030 and determined that extending the State's successful NY-Sun initiative provides the most efficient and cost-effective path forward.

Expanding the state's solar goal is expected to have an average bill impact for New York customers of less than one percent, or approximately $0.71 per month for the average residence.

Chair of the Public Service Commission Rory M. Christian said, "The ardent support and encouragement of Governor Hochul has been integral to the continued development of and access to solar energy in New York State. The roadmap we approved today provides New York with the guidelines it needs to accelerate the transition to a clean-energy economy and meet our critically important climate goals."

New York State's nation-leading climate agenda is the most aggressive climate and clean energy initiative in the nation, calling for an orderly and just transition to clean energy that creates jobs and continues fostering a green economy as New York State recovers from the COVID-19 pandemic. Enshrined into law through the Climate Leadership and Community Protection Act, New York is on a path to achieve its mandated goal of a zero-emission electricity sector by 2040, including 70 percent renewable energy generation by 2030, and to reach economy wide carbon neutrality. It builds on New York's unprecedented investments to ramp-up clean energy including over $33 billion in 102 large-scale renewable and transmission projects across the state, $6.8 billion to reduce buildings emissions, $1.8 billion to scale up solar, more than $1 billion for clean transportation initiatives, and over $1.6 billion in NY Green Bank commitments. Combined, these investments are supporting nearly 158,000 jobs in New York's clean energy sector in 2020, a 2,100 percent growth in the distributed solar sector since 2011 and a commitment to develop 9,000 megawatts of offshore wind by 2035. Under the Climate Act, New York will build on this progress and reduce greenhouse gas emissions by 85 percent from 1990 levels by 2050, while ensuring that at least 35 percent with a goal of 40 percent of the benefits of clean energy investments are directed to disadvantaged communities, and advance progress towards the state's 2025 energy efficiency target of reducing on-site energy consumption by 185 trillion BTUs of end-use energy savings.