It was a warm spring afternoon at Bronx Park East and Waring Avenue along the Bronx River Parkway, for the Ribbon cutting of the newly reconstructed Waring Playground. This was the first park ribbon cutting for new NYC Parks Commissioner Susan Donahue, and also for new Bronx Borough President Vanesa Gibson. $3.6 million dollars went into the project of then City Councilman Ritchie Torres, then Mayor Bill de Blasio, and then Bronx BP Ruben Diaz Jr. Students from nearby PS 96 who may use the new playground were also on hand to help celebrate the ribbon cutting.

Parks Commissioner Donahue spoke first describing the different amenities of the playground, and saying that this was her first ribbon cutting at a NYC park. Congressman Ritchie Torres spoke next on how he as a city councilman collaborated with the community to find out what they wanted to see in their neighborhood park. Bronx Borough President Vanesa Gibson also said this was her first Park ribbon cutting he thanked then Bronx Parks commissioner, now Deputy NYC Parks Commissioner Iris Rodriguez-Rosa, and local Bronx Park East Community members. BP Gibson added that this playground is for the children such as those from nearby PS 96. Others who spoke included Community Board 11 Chair Al D'Angelo, BPECA members Diana Finch and Raphael Schweizer, and last but not least former Bronx Park Commissioner Iris Rodriguez-Rosa now citywide Deputy Parks Commissioner who said that she is still a Bronx girl, even though she may be working downtown. 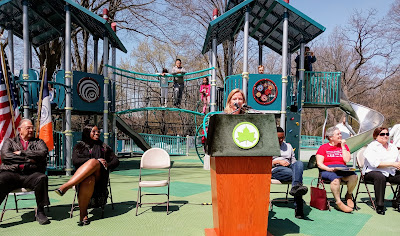 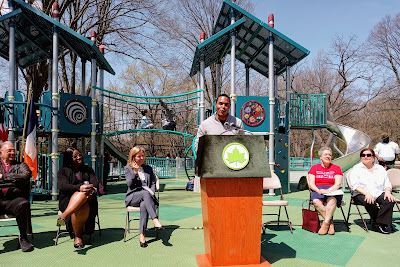 Former Councilman now Congressman Ritchie Torres said he will once again be representing the Bronx Park East community after redistricting next year as its congressman. 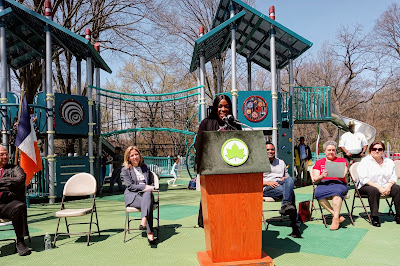 Bronx Borough President Vanessa Gibson spoke of the importance of play areas to children as they grow up, hoping that the new Waring Avenue Playground be put to good use, and that everyone keep an eye on it to make sure. 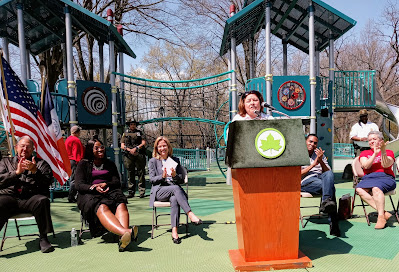 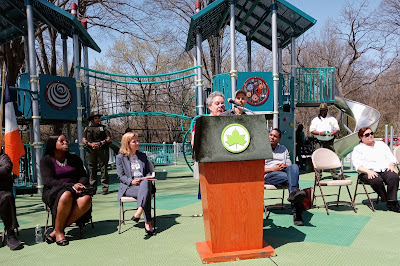 Diana Finch of BPECA says a few words about the playground. 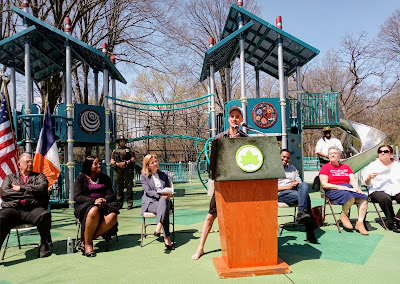 Raphael Schweizer says a few words, and thanks a few more people. 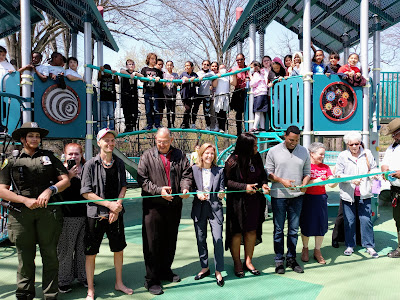 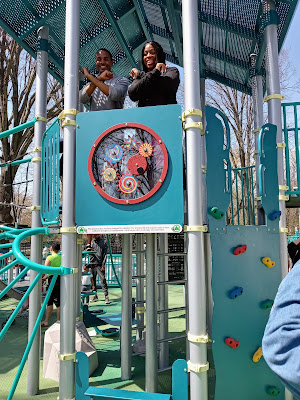 Bronx Borough President Vanesa Gibson and Congressman Ritchie Torres stand at the top of the slide showing the Bronx X. 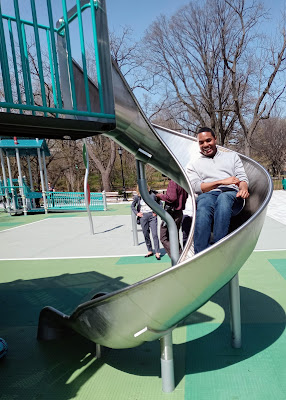 While BP Gibson took the stairs down, Congressman Torres tried out the slide.
Posted by 100PercentBronx at 9:27 PM