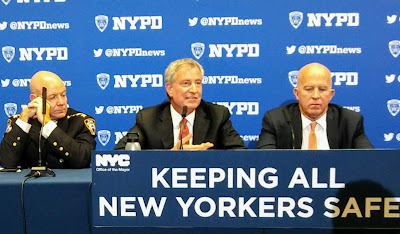 It was a crowded room full of reporters at the 40th Precinct house to hear the Mayor, Police Commissioner, and Chief of Detectives report on crime figures for the first six months of 2018.

Police Commissioner O'Neil opened the press conference by speaking about the future new home of the 40th Precinct from its current site on East 138th Street to the newest most modern police facility to be located near the Hub on East 149th Street. The new precinct house will open in 2021, at a cost of $68 million dollars, and the old precinct building will be refurbished, to be used for other police matters.

The mayor took over saying that for the first six months of 2018 total crime is down by 1.8 percent year to date compared last year. He added that New Yorkers should fell as safe at 138th Street as they do at 38th and 3rd. The mayor spoke about the death of Junior Guzman-Feliz, and alluded to fighting block by block in the Bronx to bring down crime again with the 'Summer All Out' program instituted last year of pulling desk officers out of precincts and back on the streets. He added that the police department will continue to refine its strategies.

But the bottom line is in the Bronx we know we are going to have do exactly what we have done all over the city – fight block by block to make sure we are bringing down crime and throw at the problem whatever is needed. You see a big compliment of officers that have come to precincts in the Bronx through the Summer All Out initiative. You see important actions being taken strategically to shore up any area that needs it. This is what precision policing is all about. And the NYPD will continue to refine its policing strategies.

Chief Terrance Monahan of the NYPD then went over the crime statistics fr the first six months of 2018. Overall crime is down 1.8 percent, while arrests are down 11.5 percent or 17,000 fewer arrests than in 2017. Chief Monahan tried to softsoap the figures by then saying that robberies are down 6.4 percent, burglaries down 5,4 percent, and grand larceny down 2.2 percent. He added that shootings are down 5.6 percent, but then said the NYPD still faces challenges. Murder is up 8.1 percent citywide with 147, with the Bronx leading the way 51 murders up from 21 in 2017. He added that arrests have been made on 33 cases on 70 percent of the murders that have occurred in the Bronx this year. Rape cases are up 33.2 percent for the first six months of 2018, but that was due to more rapes being reported said Chief Monahan. He added that domestic rape is up 45 percent while arrests were up 37.4 percent for rapes.

Right before taking questions from reporters The commissioner said that the hot spot seems to be the Bronx where murder was up 64.5 percent accounting for 51 of the 147 murders citywide. He added that rapes in the Bronx were up 36.7 percent slightly above the citywide average.

I was able to get a question in about the three people who were shot and killed opposite the Castle Hill Houses over two weeks ago. I said people there told me that it was a retaliation shooting, and robberies, drug activity, and gang violence is a common occurrence. The people fell unsafe, you have a photo of the suspected shooter, and people want an update on the case. Chief Monahan replied that it was an ongoing dispute between families in the area who knew each other, that the police have identified the perpetrator who fled the state. He added that the warrants team is currently looking for him to bring him back for trial. I also told the mayor that police officers on the streets had diminished over past few years. Commissioner O'Neil said that in 2017 there were 2,561 police officers in the Bronx, and in 2018 there were 2,661, an increase of 100 officers. I replied back that I am talking about a three year period going back to 2016, and the commissioner replied we have here only the figures for last year.

I was able to get another question in about Speed Cameras, telling the mayor of the flawed way the DOT did a survey not of a road in front of PS 81 in Riverdale, but a survey of a road several blocks away. The road was at the back exit of the Russian Mission which led to the southbound Henry Hudson Parkway, into a private community, and was on a downhill slope. I said that the DOT survey recorded over 90 percent of drivers speeding even only one mile above the speed limit. I said Senator Jeff Klein had surveyed the street in front of the school, and recorded a much lower figure, to which the mayor chastised Senator Klein for being against speed cameras. 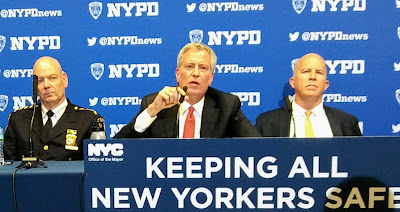 Mayor Bill de Blasio answering my question if he would survey the street in front of PS 81 for speeders. NO he said as he chastised Senator Jeff Klein for not voting to renew speed cameras.