A Tribute to the Life and Legacy of Claudette Colvin 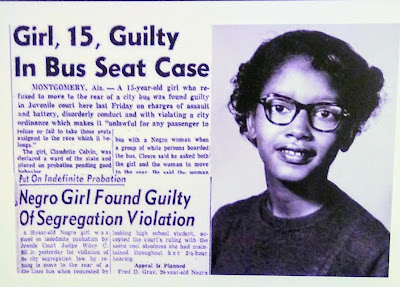 Sixty-five years ago on an Alabama bus fifteen year old Claudette Colvin (a black teenager in the 1950's) refused to give her seat to a white woman. The bus driver called the police, and Ms. Colvin was taken off the bus and arrested. This did not make headlines because the Civil Rights Movement was just getting started. It would be Rosa Parks the head of the local Alabama NAACP chapter nine months later who would be credited with refusing to give up he seat on an Alabama bus.

Local Bronx elected officials spoke, with City Councilman Ruben Diaz Sr. and Parkchester District Leader John Perez presenting a ceremonial NYC street sign "Claudette Colvin Plaza" to Ms. Colvin. Councilman Diaz Sr. proposed a street co-naming for Ms. Colvin this year, but City Council Speaker Cory Johnson said that a street can not be named after a living person. While that is false as former New York Yankee pitcher Mariano Rivera had a street by Yankee Stadium co-named for him after retiring from the Yankees, and former Mayor Ed Koch was at the re-naming of the 59th Street Bridge the Ed Koch Bridge. The street co-naming will take place next year.

There was a congratulatory video from former first lady Hillary Clinton, and daughter Chelsea, as well as several others. A portrait of Ms. Claudette Colvin was unveiled by former Parkchester NAACP President Beverly. Roberts, and there was a toast honoring Ms. Colvin. The invite only event took place at Maestros Caterers on Bronxdale Avenue. . 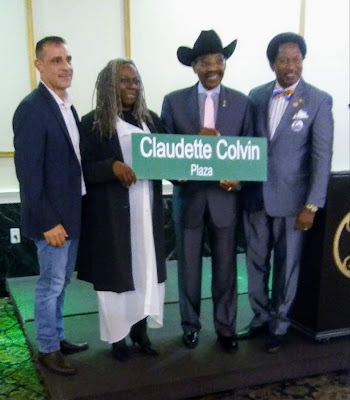 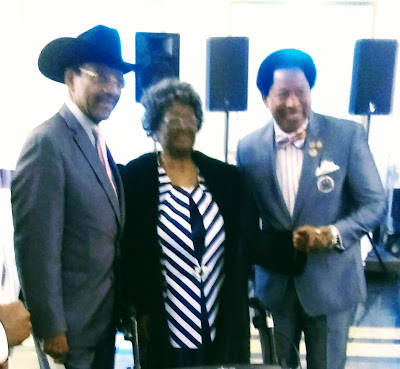 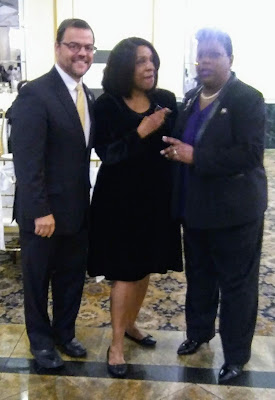 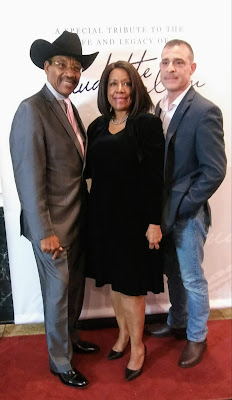 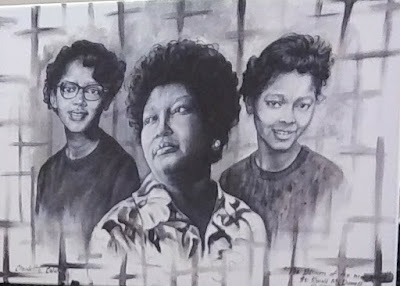 Ms. Beverly Roberts unveiled this rendering of the history of Claudette Colvin.

Email ThisBlogThis!Share to TwitterShare to FacebookShare to Pinterest
Labels: A Tribute to the Life and Legacy of Claudette Colvin

NYC Health + Hospitals today announced that NYC Care, a health care access program that is a key component of Mayor Bill de Blasio’s commitment to guarantee accessible and affordable health care for all New Yorkers, has enrolled more than 5,000 New Yorkers in the Bronx since the August 1 program launch in the borough. The program is on track to meet the Bronx enrollment goal of 10,000 patients in the first six months. In addition, 100 percent of members enrolled in NYC Care continue to be offered a first appointment within two weeks with a primary care provider, and there have been nearly 3,000 low-cost prescriptions filled during the new extended pharmacy hours that are a part of the program. After its successful implementation in the Bronx, NYC Care will launch in Brooklyn and Staten Island in January 2020. In preparation for the launch, the public health system has issued a request for proposal (RFP) to partner with community-based organizations (CBOs) in both boroughs to help engage prospective NYC Care members.

“In New York City, we’re making guaranteed health care a reality,” said Mayor de Blasio. “Health care is a basic right and with NYC Care, we are ensuring that right for working people across our City, and setting a nationwide model of what it means to provide low-cost, affordable health care.”

“I’m proud that we are already half-way to our goal of 10,000 members in the Bronx just two months into the program,” said Mitchell Katz, MD, President and CEO of NYC Health + Hospitals. “This further demonstrates how necessary it is to make high-quality, affordable healthcare accessible to New Yorkers who often are not given a viable option to live their healthiest lives.”

“Over 5,000 people in the Bronx are connected to primary care, low-cost prescriptions, and a new member experience through NYC Care” said NYC Care Executive Director Marielle Kress. “This program helped a mother who has had ear pain for years get connected with a specialist and a person who couldn’t afford insurance get a primary care doctor. It helps thousands of patients who need same-day access to medications avoid going to the emergency room. We are excited to bring these same benefits to Brooklyn and Staten Island.”

NYC Care is the new no- or low-cost health care access program of NYC Health + Hospitals for New Yorkers who are not eligible for insurance or who cannot afford it. The program, which is now operating in the Bronx and will be available citywide by the end of 2020, is expected to dramatically change the way the City’s public health system connects people to personalized, coordinated primary and preventive care at its 70-plus patient care locations throughout the five boroughs, including 11 hospitals and its Gotham Health Federally-Qualified Health Center (FQHC) network. NYC Care offers affordable medications day or night, culturally responsive care, extensive language access and interpretation services, and provides new 24/7 customer service support. Eligible New Yorkers can enroll by calling 646-NYC-CARE to meet with a financial counselor at a health system patient care site and receive a personalized NYC Care membership card in the mail.

The RFP for Brooklyn and Staten Island community-based organizations can be found on the Mayor’s Fund to Advance New York City webpage. Approximately 27.8 percent of Brooklynites and 5.9 percent of Staten Island residents are not eligible for health insurance and therefore would benefit from NYC Care.

“Pursuant to the House of Representatives’ impeachment inquiry, we are hereby requesting that you produce the documents set forth in the accompanying schedule by October 15, 2019,” the Chairmen wrote.

The Committees are investigating the extent to which President Trump jeopardized national security by pressing Ukraine to interfere with our 2020 election and by withholding security assistance provided by Congress to help Ukraine counter Russian aggression, as well as any efforts to cover up these matters.

“Recently, public reports have raised questions about any role you may have played in conveying or reinforcing the President’s stark message to the Ukrainian President,” the Chairmen wrote.  “The reports include specific references to a member of your staff who may have participated directly in the July 25, 2019, call, documents you may have obtained or reviewed, including the record of the call, and your September 1, 2019, meeting with the Ukrainian President in Warsaw, during which you reportedly discussed the Administration’s hold on U.S. security assistance to Ukraine.”

“The Committees are seeking the documents in the attached schedule in order to examine this sequence of events, including the Administration’s attempts to press the Ukrainian President to open an investigation into former Vice President Biden or election interference in 2016, and the reasons behind the White House’s decision to delay critical military assistance to Ukraine that was appropriated by Congress to counter Russian aggression,” the Chairmen concluded.
Click here to read the letter to Vice President Pence.

“We’re facing unusual heat for this time of year,” said Mayor de Blasio. “In response, we are deploying extra patrols to ensure a swift response in case of emergency, but it’s critical that all New Yorkers put their safety first and stay out of the water at our beaches.”

To ensure New Yorkers remain out of the water and safe, NYC Parks has increased Parks Enforcement Patrol presence at Rockaway Beach today. Twelve additional officers have been assigned to the boardwalk and to patrol the beaches.  A FDNY harbor boat will patrol the waters by the Rockaways, a Rapid Response Vehicle will patrol the shores with members trained to make cold water rescues and EMS units will be on scene to treat anyone in need. The NYPD will also deploy additional officers and harbor search and rescue teams to patrol the beaches.

All beaches are closed to swimming. The outdoor swimming season ended September 8, as such, there are no Parks lifeguards on duty at city beaches. Signage warning visitors to only swim when lifeguards are on duty is posted at entryways of all beaches.

New Yorkers should adhere to all signage and instructions from officials for their own safety, and to call 911 for beach emergencies.

It is nice that Mayor de Bllasio cares about people going into the beach in the Rockaways, but as usual there is no mention of the Bronx that has 'Orchard Beach'.

What is Samelys Lopez Candidate for 15th Congressional District Hiding? 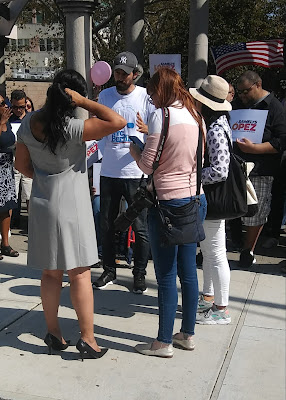 A few blocks from the Bronx Board of Elections Samelys Lopez announced her candidacy for the 15th Congressional Race. This announcement was expected three months ago which would have made Ms. Lopez the first woman candidate in the race to replace Congressman Jose Serrano. Now Ms. Lopez becomes the fourth woman in the crowded 15th Congressional race. Just who is supporting Ms. Lopez's candidacy was unclear as all that was said was union and community members. However Assemblyman Jose Rivera did show up to make sure Ms. Lopez was running for congress, and not against him.

Her campaign literature says that Samelys Lopez is the co-founder of Local Democrats of NY, which supports grassroots candidates for County Committee and other elected positions.
She is also an active member of Bronx Progressives, a chapter of the New York Progressive Action Network.

Ms. Lopez lived in the Northwest Bronx where she was a member and elected Vice-Chair of Community Board Seven until she was not reappointed to the board. She now resides in the Castle Hill Parkchester area. This Reporter was promised an interview with the Ms. Lopez after the one television station was done. That did not happen because her consultants left telling me someone else would handle the interview, and that person said they did not know anything about an interview.


What is Samelys Lopez hiding? 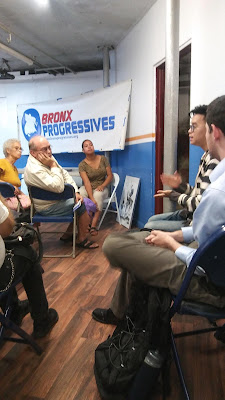 “I was elected on a promise to end the Tale of Two Cities and that’s exactly what we’ve spent every day of the last five years working to do,” said Mayor de Blasio. “Poverty in New York City is at historic lows. From fighting for a $15 minimum wage to guaranteeing Pre-K for every child to Paid Safe and Sick Leave, we are putting more money in the hands of working families and creating a fairer city for all.”

“The bold actions that New York City is taking—on housing, wages, early childhood, health care, and more—are producing meaningful and important progress in reducing poverty," said Matthew Klein, Executive Director of the Mayor's Office for Economic Opportunity.  "The positive trends reflected in this most recent federal Official Poverty rate for New York City are consistent with the findings of our office's own more precise poverty measure released each spring.  We are clearly moving in the right direction, and committed to pushing hard for even more."

Under the de Blasio Administration:

In addition to revealing positive trends, the American Community Survey details changes in New York City measures from year-to-year. From 2017 to 2018:

The American Community Survey uses a representative sample of New York City population and is the national source for federal official poverty data at the local level. All 2013 dollar amounts are adjusted to 2018 dollars for comparison to the new data. The Mayor’s Office for Economic Opportunity produces a more comprehensive NYC Government Poverty Measure (NYCgov Poverty Measure) each year, which takes into account the cost of living in New York City as well as the impact of non-cash benefits like SNAP and tax credits like the Earned Income Tax Credit (EITC). The 2018 NYCgov Poverty Measure will be released in the spring.