Staff from Lincoln Medical and Mental Health Center, a CAN partner, will be on site to register community residents, record vital stats, measurements and screen for blood pressure and diabetes. Blink Fitness will have trainers on site to provide fitness tips and will be extending free trials to all participants 18 years and older. Blink Fitness will also provide a complementary six-month membership to the top male and female participants with the highest percentage of weight loss.

"The Bronx CAN Initiative has changed the lives of countless Bronxites by promoting a healthy lifestyle and allowing people to take control of their well-being by establishing positive goals. Too many of our residents are suffering from preventable ailments like obesity and high blood pressure. It’s very exciting that this initiative is expanding outward to other areas of the Bronx, and I look forward to working with Borough President Diaz to promote healthy living in my district. I encourage everyone to take the Challenge, and take a positive step toward an active, healthy life,” said Senator Jose M. Serrano.

The Bronx CAN Health Initiative brings together individuals, doctors and other health providers, places of worship, community gardens and community centers, schools, and civic-minded groups of all kinds to promote the types of behaviors that lead to healthy lifestyles. The goal of the Bronx CAN Health Initiative is to have all the members of our community – young and old alike – build healthier lives, free of ailments like obesity, diabetes, high blood pressure and high cholesterol, and cardiovascular disease. 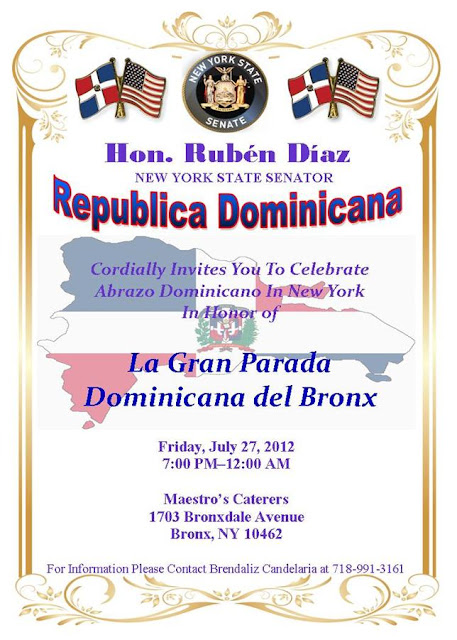 National Night Out in the Bronx 2012

Encourages All Bronxites to Join Their Neighbors & Attend

“America’s Night Out Against Crime”


NATIONAL NIGHT OUT HELPS US TO:

Details on those jobs are available at the following links:

For more information contact Angela Porcelli at (718) 283-4081 or angela@masmarketingny.com.

The NYC Department of Transportation announced tod, ay that it will implement a “Neighborhood Slow Zone” that was proposed by Assemblyman Jeffrey Dinowitz for Independence Avenue and several surrounding streets.  Assemblyman Dinowitz submitted an application for the Neighborhood Slow Zone last November with the support of Council Member Oliver Koppell, State Senator Adriano Espaillat, the captain of the 50th Police Precinct, members of the community board, and the parents associations of several schools.

The Neighborhood Slow Zone will include many important traffic safety modifications for the area, including a 20 miles-per-hour speed limit, speed bumps, markings, and signs and gateways indicating the presence of the Slow Zone.  The Slow Zone will help remedy the dangerous traffic situation on Independence Avenue, which is home to several schools, houses of worship, a library, and a public park.

In a press conference outside his State Senate office Adriano Espaillat announced that he will no longer go forward with his challenge to the results of the 13th congressional race. Espaillat said that while a few more votes were found for him lowering Rangel's lead to 953 votes that number could not be overcome. Espaillat then congratulated Rangel on his victory saying that he will work with him as he has done in the past for the districts they share.

When asked if he would be continuing the court challenge, he said that he would not, but others will still be doing that in the hopes of fixing the election system.

When asked if he would now be running for his old state senate seat, Espaillat fudged a little saying that after the June 26th election when he thought that he lost he allowed people to get signatures in his name for state senate.Petitions are being handed in starting today for state senate and assembly seats, and will continue for the next few days. After that is the challenge phase, and then rulings by the Board of Elections as to just who stays on the September primary ballot.


City Comptroller John C. Liu today called on Mayor Bloomberg to move swiftly to identify those senior administration officials responsible for orchestrating and overseeing the illegal lobbying activities at the Economic Development Corporation. In a letter to Bloomberg, Liu also called for all of EDC’s finances to be made publicly available online through the Checkbook NYC transparency website.

Liu called on Bloomberg to change the agency’s “law-breaking” culture a day before the EDC was set to hold a public meeting to approve the agency’s restructuring as part of its recent settlement with the New York State Attorney General.

“Installing new leadership and opening the books would help change the EDC’s law-breaking culture, which, as documented in the settlement with the Attorney General, used the agency’s budget as a political slush fund for illegal lobbying,” Liu wrote.

The EDC signed an agreement with the State Attorney General last week in which it admitted to illegally lobbying City Council Members about the Mayor’s economic agenda. However, there has been no move to hold anyone at City Hall or the EDC accountable for these acknowledged illegal activities.

Background:
Comptroller Liu has been an outspoken critic of the EDC, its policies, and the failure of the agency to create jobs — one of its main objectives. Some links to past statements/audits are below:

The full letter from Comptroller Liu to Mayor Bloomberg is below:

The proposed legal restructuring of the EDC, which appears to have been undertaken so that the impermissible lobbying can continue, is clearly insufficient. It amounts to nothing more than business as usual.

To this end, I urge you to move swiftly to identify those senior officials from City Hall and the EDC responsible for the flagrant and repeated law-breaking activities, and hold them accountable. I also urge you to finally open the EDC’s books to the public. The EDC’s FY 2013 budget is projected to exceed $800 million. It’s time to post all of the EDC’s spending online on a daily basis, as other City agencies now do through Checkbook NYC.

Installing new leadership and opening the books would help change the EDC’s law-breaking culture, which, as documented in the settlement with the Attorney General, used the agency’s budget as a political slush fund for illegal lobbying.

As someone who has signed into law a number of lobbying reforms and been outspoken on the need for “insulating policymakers from the sway of special and moneyed interests” and strengthening the “taxpayers’ faith in their elected and appointed representatives,” I trust you agree that accountability and transparency in government are imperative.

These actions are necessary to prevent further waste of taxpayer money. I look forward to your prompt action in these matters.

13th C.D. candidate Adriano Espaillat who finished second after all the ballots have been counted has schudeled a press conference for today at 2 PM.

It is being speculated that Espaillat will either admit defeat in the 13th C.D. race to run for his State Senate seat again, or will announce that he will push on with his lawsuit against the Board of Elections.

We will have the results for you in a later post.
Posted by 100PercentBronx at 12:58 PM No comments:

Holding her grandson close, Jacqueline Amonitti stood before a colorful drawing of a carousel horse on display at the JASA Van Cortlandt senior center.

The informal exhibit, which features drawings, paintings and collages of 23 artists, is the culmination of art classes at the senior center on Sedgwick Ave. run by the Jewish Association Serving the Aging (JASA).

Artist Michael Ferris Jr. worked with the seniors for five months as part of the city's SPARC (Seniors Partnering with Artists Citywide) program which pairs artists with senior centers.

Ferris encouraged his students to delve into their memories to create self portraits, landscapes and other imagery.

"As time went on, they became a lot freer and weren't so intimidated by the process of making art," he said. "As a result, there was a lot of creativity kicking in at the end."

Amparo Charneco's colorful drawing of two ballerinas took her back to her days studying fashion illustration as a student at the Fashion Institute of Technology in Manhattan.

"This refreshed me," said Charneco, 73. "I haven't drawn anything in more than 35 years. This got me to be more active again and I really enjoyed it."

Amonitti, 65, who described the classes as "therapeutic," enjoyed them so much she plans to return for more sessions in the fall.

"It was great," she said. "It's a type of expression and that brings out stuff you didn't even know was there."

Bronx Borough President Ruben Diaz Jr. announced that his office has provided more than $22 million in capital funding to worthy Bronx organizations as part of his FY2013 budget.

In total, Borough President Diaz has provided $22,971,000 in capital funding to organizations from every corner of the Bronx, focusing on areas of economic development, housing, education and parks, among other areas.

“Each year, my office is proud to support dozens of amazing schools, community organizations and development projects across the Bronx. This critical funding will help to bring many important projects to completion, helping our borough become an even greater place to live, to work and to raise a family,” said Bronx Borough President Ruben Diaz Jr.

The largest portion of this year’s budget allocation—roughly 24 percent—went towards funding housing developments in the borough. This includes 110 units of mixed-use housing in West Farms as well as a solar thermal project to green existing buildings through partnerships with community organizations.

“Our borough’s economy continues to grow, and these projects will ensure that we continue to see considerable job creation and retention in the Bronx,” said Borough President Diaz.

Borough President Diaz also funded a total of 29 projects related to the borough’s education institutions. This includes funding for a green roof installation at the future Highbridge Middle School, an auditorium upgrade at P.S. 91 in University Heights, gymnasium upgrades at P.S. 119 in Castle Hill and technology upgrades at a number of schools across the borough.

Borough President Diaz also funded several important higher education projects, including new handicapped entrance ramps and a renovation of Ohio Field on the campus of Bronx Community College, a roof replacement at the Savoy Building at Hostos Community College and the development of a One-Stop Student Services & Transfer Center at Lehman College.

“Education remains an important focus of my administration, and my office will continue to provide the necessary funding that Bronx students at all levels need to succeed,” said Borough President Diaz.

Borough President Diaz also provided significant funding for parks, almost 15 percent of the budget for a total of $3.4 million. This includes a new dog park at Soundview Park, as well as renovations to the hockey rink at Bufano Park in Throggs Neck and basketball courts at Orchard Beach. Borough President Diaz also funded libraries, health providers and other important institutions in this year’s capital budget, such as upgrades at the Spuyten Duyvil and Wakefield branch libraries and new dental equipment at both Lincoln Hospital and the Union Community Health Center.

“Each of these projects, in its own way, will contribute to the continued revitalization of our borough, and I am thrilled to have played a role in so many exceptional new developments,” said Borough President Diaz.

End in 13th Congressional District Race Could be Near

The Board of Elections has counted all the holdover votes that being the affidavit and absentee ballots and there are preliminary numbers that show Congressman Rangel's lead increased to 990 votes.

The results for the 13th C.D. is scheduled to be made official at Tuesdays meeting of the commissioners of the board. A scheduled Wednesday court date will be the last chance for Senator Espaillat to try to over tun the election.