Having been at the New York City Board of Elections headquarters where the hearings on the specifications filed against candidates running are being heard the past two days, this will continue on Tuesday August 3rd as all hearings were not finished today as scheduled.
Today Board of Elections commissioners ruled that a few of the candidates being challenged are to remain on the ballot, and of note today Board commissioners ruled 80th Assembly candidate Robert Guiffree on the ballot, however candidate Guifree still faces a court challenge to be heard on Tuesday afternoon. Mr. Guifree was angered by what he called trying to tie him up at the Board of Elections and in court. Guifree added "that the voters of the 80th Assembly District will know about this".
On another note former Queens State Senator Hiram Monserrate's petition for Assembly was ruled valid by the Board of Elections commissioners after being challenged. Mr. Frank Bolz attorney for the challenger of the Monserrate petition said aloud that "the petition was safe for now, but won't be after the hearing in court next week".
Posted by 100PercentBronx at 6:41 PM No comments:

State Senator and Deputy Majority Leader Jeff Klein (D-Bronx/Westchester) and Weill Cornell Community Clinic will provide free heart health screenings to Bronx Residents on Saturday, July 30th at the Throggs Neck Community Center at Throggs Neck Houses.  At the event, which will run from 8:30AM-12:0PM, community members can have their blood pressure and cholesterol tested, and be screened for diabetes. Physicians will be on hand to provide referrals and recommendations based on individuals’ screenings, and to answer any questions.
The screenings will be on Saturday, July 31st starting at 9:30AM at the Throggs Neck Community Center 550 Balcom Ave, Bronx.
Posted by 100PercentBronx at 4:46 PM No comments:

Fernando Tirado was declared off the ballot for the 33rd State Senate today by the Board of Elections. The Board of Elections ruled that the challenge by Mr. Steve Balicer had placed Mr. Tirado's petition at 736 valid signatures when 1000 valid signatures were needed to be a candidate for state senate. It is not known at this time what Mr. Tirado is going to do, that being to try to validate his petition through the courts or wind up endorsing one of the other candidates in the 33rd State Senate race.
In other 33rd Senate District news, we received this from the Pedro Espada camp.

The Living Wage NYC Campaign announced today that a majority of New York City Council members have now signed on in support of the Fair Wages for New Yorkers Act (Intro 251) requiring developers who receive major taxpayer-funded subsidies to pay at least a living wage for the permanent jobs they create.
"Reaching this majority shows that when City Council Members are faced with a clear choice about what type of economic development our tax dollars should support, one that keeps people in poverty or one that provides a path to the middle class and supports our communities, they will make the right choice. The majority has decided that public subsidies must be used to create permanent living wage jobs," said Rev. Sekou,  a member of the Living Wage NYC Coalition from the Micah Institute.
Every year New York City spends billions of taxpayer dollars to subsidize development and create jobs. Too often the permanent jobs created with these public subsidies pay poverty wages with no benefits -- whether it's retail and stockroom jobs at shopping centers, mailroom jobs in office buildings, or food service jobs at stadiums.
Under the bill, the living wage will start at $10.00 per hour - the same as under New York City's existing living wage law. Employees who are not covered by an employer-provided health plan will receive an additional $1.50 per hour wage supplement to help them purchase their own health insurance.  Both the living wage and the health benefits supplement will be adjusted each year to keep pace with the rising cost of living.
Reaching the 26-vote threshold needed to pass the Fair Wages for New Yorkers Act adds to the momentum for a citywide policy to guarantee fair wages on subsidized development projects. The Fair Wages for New Yorkers Act will lay out clear expectations for developers and help speed economic growth that  will create jobs that benefit all New Yorkers.
More than 15 cities have enacted such legislation and they have found that these policies create quality jobs for local residents without slowing growth. New York City is behind the times on this issue and, as a result, our publicly subsidized developments are keeping people in poverty-wage jobs, rather than providing them with opportunities to get ahead.
Posted by 100PercentBronx at 5:01 PM No comments:

Will The New York Budget Ever Be Finalized?

In what is being called A Charade by Senate GOP leader Dean Skelos, it took only 15 minutes for the latest Special Session of the New York State Senate to end. “We are now almost in August and the Senate Democrats refuse to complete the budget process,” said Skelos said. "A total failure of leadership. At some point, vote yes, vote no and lets get this done.”
Nine senators were not present when the Senate was conducting business - five Democrats and four Republicans. The Democrats were Malcolm Smith, George Onerato, Joseph Addabbo, Thomas Duane, and Bill Perkins. Perkins arrived after the session ended, saying that he was running a little late.
The Assembly fared much better with 78 of the 107 Democrats and 114 members showing up out of a total of 151 members of the assembly.
Governor David Paterson has called another Special Session of the legislature for today, and has vowed to call special sessions every day until the budget is final.

Jasper's Pizza Italian Cuisine (as it is listed) was the site for the release of the new restaurant guide of the Riverdale, Kingsbridge, and Van Cortlandt area. Funded by Councilman G. Oliver Koppell, and compiled by the Kingsbridge-Riverdale-Van Cortlandt Development Corporation the new guide lists about 100 local area restaurants in alphabetical order with locations listed below the name of the restaurant. While a first draft of only 200 were printed, there will be updated guides published as more information about the listings come in.
Jasper's provided samples of some of its fine Italian Cuisine for those who came to the announcement
For more information contact KRVCDC at 718-543-7100, or go online to www.krvcdc.org 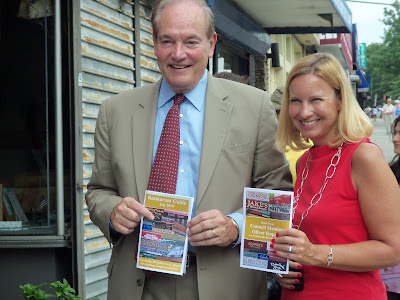 Pictured are Councilman G. Oliver Koppell and Ms. Tracy Shelton of KRVCDC holding up the restaurant guide.
Posted by 100PercentBronx at 4:59 PM 2 comments:

The Daily News reports that Bronx Democratic County Committee Chairman Jeffrey Dinowitz will not move to expel embattled New York State Senate Majority Leader Pedro Espada Jr. from the Democratic party, at least until the September Democratic primary.
Dinowitz is quoted as saying that there is no pressing reason to do this now, but the News said that does not mean that the issue could resurface after the primary.
Espada's response to the Daily news was "I can give two hoots about how Dinowitz feels because the fact of the matter is [trying to boot me] is un-American,"
Posted by 100PercentBronx at 9:45 AM No comments:

Will Congressman Rangel Get off With a Wrist Slapping?

Earlier today Congressman Charlie Rangel met with Democratic Party leaders in an effort to make a last minute deal, and avoid Thursday's public airing of his alleged wrongdoings. Democratic Party insiders want Rangel to make a deal as not to be the poster boy for the Republican Party come this November election.
A deal where Rangel will get what amounts to a slap on the wrist could be in the making, but that deal could fall apart if the Republicans have anything to do about it.
Unless Rangel and the Dem leadership can work out an agreement, the Ethics committee will read out the lengthy list of charges against Rangel on Thursday. Rangels congressional trial could start on September 13th,  the day before the New York State Democratic Primary.
Posted by 100PercentBronx at 7:33 PM No comments:

New York City Comptroller John C. Liu announced that the City will now recapture $120 million from the New York City Economic Development Corporation (EDC).  The funds represent revenues collected by the EDC on behalf of the City from the 42nd Street Project (aka Times Square redevelopment).  The EDC has in past years inappropriately retained the money instead of passing it through to the City treasury, as revealed in an audit of the EDC completed by Comptroller Liu in April.
The $120 million of new revenue was first identified in the Fiscal Year 2011 Adopted Budget (http://www.nyc.gov/html/omb/downloads/pdf/adopt10_rfpd.pdf , page 28). The revenue will be collected over four years beginning with $20 million this year and increasing to $40 million in Fiscal Year 2014. Its is expected that the annual revenue would continue indefinitely and at an increasing rate beyond 2014.
Comptroller Liu stated, “This is good news for the people in a time of continuing economic uncertainty.  It's $120 million that can be put to good use in schools, hospitals, day cares, and senior centers.  Times are still tough and we just cannot afford to allow the EDC or any entity to keep hoarding so much money that belongs to the City's taxpayers.”
Posted by 100PercentBronx at 11:44 AM No comments:

On Sunday, July 25, Bronx Borough President Ruben Diaz Jr joined by hundreds of Bronxites celebrated the 21st  Anniversary of the Grand Dominican Parade in The Bronx, one of the largest parades in New York City.
More than 50 floats and over 2,000 marchers, including folkloric groups, marching bands, artists, elected officials and a variety of groups representing the Dominican culture and traditions, were part of this year’s parade
“This parade is a great opportunity to recognize our growing Dominican-American population and their contributions to The Bronx and the entire city,” said Bronx Diaz Jr, one of the grand marshals. “They are a vibrant community that makes our economy stronger and with their traditions, Dominicans also add a lot of flavor to our borough”.