Before I get into the 78th A.D. race next year, there will be a special election to replace outgoing 17th Councilwoman Maria Del Carmen Arroyo. This special election will probably take place on the same day as the federal election primary day for President and Congress if there are to be any Presidential or Congressional primaries. In this special election there are going to be at least six if not seven candidates which may include the current Community Board Two District Manager Rafael Salamanca Jr. While Mr. Salamanca said to me two days ago that he has not committed to running I told him of previous Community Board District Managers who began to run for office. I reminded him of the success of a former District Manager who is in his third and last term in the City Council, but I also reminded him that there are many other former District Managers who never were elected to anything. One elected official has already told me that he is supporting Mr. Salamanca for the council seat, and I reminded that elected official that he has not endorsed a winner since 2009. I will have more on this special election in upcoming columns.
Speaking of upcoming columns, as of December 16th you will be able to read this column and its sister column the Riverdale Report in the new 'Bronx County News'. The Bronx County News will be a brand new newspaper that will be circulated in Riverdale, Norwood, Bedford Park, Morris Park, Soundview, and many other areas. I am pleased to be a part of the 'Bronx County News', and if you liked my columns and special coverage of other events you will like the Bronx County News which will have several unique sections.
The Committee of 100 Democrats will be hosting their First Annual Holiday Banquet on Tuesday December 15th at Willie's Steak House located at 1832 Westchester Avenue beginning at 6 PM and running through 11 PM. To reserve your seat or for more information you can call the Committee of 100 Democrats Executive Director Mr. John Perez at 347-338-4950. This event will be held 'In Honor and Memory' of Dominick Fusco Esq. the founder of the Committee of 100 Democrats.
As for the 78th Assembly District there seems to be a game of which Rivera will be running. Assemblyman Jose Rivera is the current assemblyman, but it seemed that he was trying to pass on the assembly seat to his daughter Naomi Rivera the former Assemblywoman from the 80th Assembly District who had been redistricted into the 78th A.D. It seems that Naomi Rivera attended Bronx Democratic County functions with her father such as the county dinner and county barbecue, but in order to keep Naomi Rivera from running another female candidate came forward who was a member of Community Board 7 with stronger ties to the community that Ms. Rivera.
What was Jose to do? I have been told that he is pressuring his son and former City Councilman Joel Rivera to run for the 78th Assembly seat. During the last redistricting it seems that not only was daughter Naomi, but also son Joel (who at the time were both residing at 601 Pelham Parkway North) were redistricted from the 80th A.D. into the 78th A.D. Maybe Jose knew that his daughter would loose her assembly seat as she did to the current Assemblyman Mark Gjonaj.
My advice to Joel Rivera would be not to run, as we saw how your Chief of Staff Mr. Alvarez did in his race to succeed you. It appeared in the twelve years as not only a councilman, but as the council Majority Leader there was nothing to show for all those years. There are also many other things that would come out in a heated election that you would be embroiled in. Enjoy yourself as you are now, and stay out of politics as was your thought when you went into your career in Real Estate. Jose, let your children enjoy themselves, as you see what is going on in Albany now. All your old friends are either retired, getting out of or going to jail. The one who was once called 'Sterling Silver' is now 'Tarnished Silver'. Enjoy your retirement Jose, and Happy Chanukah/Merry Christmas to all. Check this blog for the listings of Menorah and Christmas tree lightings including the Bronx Menorah lighting on Tuesday afternoon December 8th or the Bronx Christmas tree lighting on Thursday night December 10th at the Bronx County building on the Grand Concourse and East 161st Street.
If you have any political information that you want to share or have checked out, any comments about this column, or would like to have an event listed or covered in this column or on this blog you can e-mail us at 100percentbronxnews@gmail.com or call 718-644-4199 Mr. Robert Press. 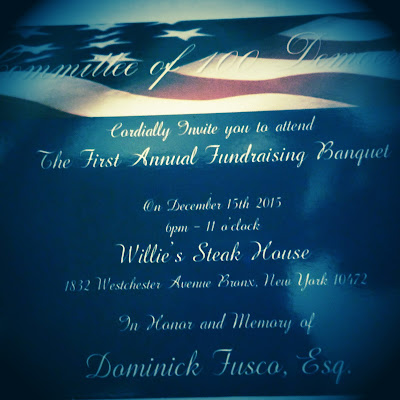 This event will take place at Willie's Steak House beginning at 6 PM and running until 11 PM. For more information, and to reserve your seat you can call the Executive Director Mr. John Perez at 347-338-4950.


On Friday, December 11 from 12PM – 2PM, Walgreens will be giving flu shots at our district office, located at 573 East Fordham Road (on Hoffman Street between East Fordham Road and East 191st Street). The only item required is an insurance card. This event is in partnership with Walgreens and Montefiore.

An appointment is not required. If you have any questions, please do not hesitate to contact Luisa Benedetto at (718) 842-8100.

World's Largest Menorah and a concert by Pey Dalid

Email ThisBlogThis!Share to TwitterShare to FacebookShare to Pinterest
Labels: World's Largest Menorah and a concert by Pey Dalid

The first North Bronx Democratic Club Holiday Party is sure to become an annual event with the overflow crowd of more than 300 people. The event and the journal were sold out over a week before the event took place. State Senator Jeff Klein and Assemblyman Mark Gjonaj have successfully revived the original club of the 80th Assembly District that elected Jeff Klein an assemblyman in the early 1990's.
The Guest of Honor was New York State Assembly Speaker Carl Heastie, with Honorees Norman Seabrook (President, NYC Correction Officers Benevolent Association), Ms. Beatrice Castiglia Catullo (Founder, RAIN Inc.), Joseph Kelleher (President, Metro Properties and Chairman, Bronx Chamber of Commerce), and Meisha Ross Porter (Superintendent, Bronx School District 11).
As usual the photos below will tell the rest of the story.

Above - Just some of the 300 plus attendees.
Below - Assembly Speaker Carl Heastie was the Keynote Speaker.

Above - Honoree Meisha Ross Porter thanks the club for honoring her on her outstanding career of leadership in public education.
Below - A group photo of the Honorees, elected officials, and club President and Executive Director.

Above - With Assembly Speaker Carl Heastie between State Senator Jeff Klein and Assemblyman Mark Gjonaj, the club President and Executive Director are also in the photo.
Below - While the NBDC might be the club of the 80th A.D., 81st Assemblyman Jeffrey Dinowitz and Councilman Andrew Cohen of the Riverdale section of the 34th State Senate district were on hand to give support.


Bronx District Attorney-elect Darcel Clark announced her Chairpersons for her Transition Committee, as well as the establishment of subcommittees to further prepare for the beginning of her administration onJanuary 1st.
Daniel E. Karson, Chairman of Kroll and former General Counsel and Assistant Commissioner of the Department of Investigation of the City of New York, and Taa Grays, Chief of Staff to MetLife’s General Counsel, were named by Clark as Co-Chairs of the 40-member transition team. Karson and Grays will lead all efforts to implement the District Attorney’s priorities of greater transparency, accountability and responsiveness throughout the office.
Along with his experience at Kroll and at the City’s Department of Investigation, Karson was born and raised in the Bronx and also worked as a Bronx Assistant District Attorney serving as Chief of Narcotics Investigations.
Prior to beginning her time at MetLife twelve years ago, Grays served as a Bronx Assistant District Attorney in its Rackets Bureau for five and a half years. She is also very active in the legal community and holds leadership positions with several organizations, including president of the Metropolitan Black Bar Association.
“In our Co-Chairs, we have two individuals who started their careers as Bronx Assistant District Attorneys,” said DA-elect Clark. “Not only do they understand the Bronx and this office, but their wealth of experience will be a tremendous asset in assisting me as I prepare to take office.”
Subcommittees
In addition to the announcement of Co-Chairs, Clark also announced the creation of subcommittees and chairs to further organize tasks and priorities throughout the transition.  They include:
Additional Committee Members
Clark also announced an additional three members who Clark believes will further add to an already stellar group of experienced and distinguished attorneys and community leaders.
Rabbi Barry Dov Katz has served the Bronx community at the Conservative Synagogue Adath Israel of Riverdale since 1998.  Rabbi Katz has worked with members of the congregation to further the inclusion of people with special needs, in welcoming LGBT individuals and families, and in forming a social group for Jewish 20’s and 30’s in the Bronx.  Rabbi Katz served as President of the Riverdale-Kingsbridge-Spuyten Duyvil Clergy Conference and as co-chair of the Bronx Borough President's Jewish-Hispanic Task Force, and is also an Adjunct Lecturer of Professional and Pastoral Skills at the Jewish Theological Seminary.
Chauncey Parker serves as an Executive Assistant District Attorney and Special Policy Advisor to New York County District Attorney Cy Vance, and also serves as the Director of the New York/New Jersey High Intensity Drug Trafficking Area program. Parker notably also served as an Assistant U.S. Attorney for the Southern District of New York, as the Director of Criminal Justice for New York State, and as Commissioner of the New York State Division of Criminal Justice Services under Governor George E. Pataki.
Bishop Nancy Rosario is the co-founder of Church of God’s Children in Co-op City, and also is the founder of R&R Team Management, a Women Owned Minority Business.  She also has served as the Legal Representative at Bronx Housing Court for Riverbay Corporation for over 31 years. Bishop Rosario is a leader in advocating for HIV & Hep C testing and Domestic Violence Awareness, and also serves as the clergy liaison for for the NYPD Grandmother’s Love over Violence.
“As with all of the transition team, I’m grateful for their willingness to serve on this committee, and look forward to their keen insight on how to make this office work best for all the people in the Bronx,” Clark added.
For a list of the full Transition Committee, please click here.  For those who are interested in being considered for a position within the Office of Bronx District Attorney Darcel Clark, please send resumes and cover letters totransitionbxda@gmail.com.
Posted by 100PercentBronx at 5:48 PM No comments: