According to a Daily News story Brooklyn Councilman Charles Barrons missed 34 of 121 city council meetings or hearings for the worst attendance record. Barrons had 28% no show rating, and defended his high absentee rate by saying that he has a perfect attendance in his community.
Second to Barrons is the Bronx's own Larry Seabrook (currently under federal indictment) who missed 32 of 118 meetings or hearings or 27%. There was no comment from Councilman Seabrook.
Third on the list was Queens Councilman James Gennaro who said that he is the primary care giver for a family member with a chronic illness. Gennaro missed somewhere between 19% and 27% rating that was not mentioned.
Fourth was City Council Majority Leader Joel Rivera who was reported to have missed 34 of the180 hearings for 19%. Rivera defended his absences to sick days and attending legislative delegations in Chicago and Puerto Rico.
The average attendance rate was 90% for most current City Council members, with only Speaker Quinn (who serves on no committees), and Upper Manhattan (and former teacher) Councilman Ydanis Rodriguez.
You can read the Daily News story here.
Posted by 100PercentBronx at 5:00 PM No comments:

New York City's Deputy Mayor of Operations Stephen Goldsmith is leaving city hall after 15 controversy months, to pursue a job in finance. According to Celeste Katz  the man who is best known for tweeting "Good Snow Work" during the crippling December blizzard. will be replaced by DEP commissioner Cas Holloway.
You can read the Daily News story by Ms. Katz here.

Response From Department of Sanitation
Re: Baez Trash Cans 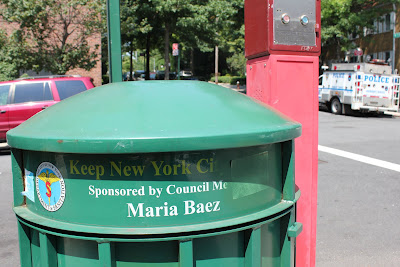 Here is a photo (sent in by one of our readers) of one of the two trash cans that were placed on the corner of West 238th Street and Greystone ave in the middle of, and two blocks away from Councilman G. Oliver Koppells district  office.
The response given by the Department of Sanitation was-
Former Councilmember Baez did share a geographical boundary with Councilmember Koppell.  Her name will be removed from the baskets.  Sponsors are given the option of having their names or logos on basket labels, though not all sponsors have their names on baskets.  Knowing the name of a basket sponsor is a valuable tool that enables DSNY to contact the right party when there is an issue related to the sponsored basket, such as when it is damaged or missing.  Basket labels recognizing sponsors also help promote the program.
Posted by 100PercentBronx at 2:30 PM No comments:

Email ThisBlogThis!Share to TwitterShare to FacebookShare to Pinterest
Senator Rivera Launches Weekly Walk With Your Senator as part of the Bronx CAN Health Initiative
Joins WalkNYC’s Weekly Walks around St. James Park


The New York City Department of Sanitation placed two trash cans on the corner of Greystone Avenue and West 238th Street recently. Now that is a good thing, however the council member listed on the side of the can is Maria Baez. Councilwoman Baez of the 14th council district was defeated in the 2009 Democratic Primary by now Councilman Fernando Cabrera. The two can are also happen to be right in the middle of the 11th council district and two blocks away from the office of Councilman G. Oliver Koppell.
We can only wonder how the two trash cans were placed where they were, or could it be that they are on the corner of the former Vice-Chair of Community Board #8 who was appointed by Councilwoman Baez to CB8, and not reappointed by new Councilman Cabrera.
Posted by 100PercentBronx at 12:54 PM No comments:

Senator Jeffrey D. Klein, today released a startling new survey that shows many foreclosed properties across New York City in a similar state of disrepair as the bank-owned property that claimed three lives in a fatal fire last Spring.
Several of these properties also appear to be occupied, while having serious building code violations levied against them –  ratcheting up the potential for additional deadly consequences.

“Even while holding ticking time bombs, these banks continue to disregard the law and act irresponsibly,” Senator Klein said. “The fact that this sorry state of affairs exists after the tragedy on Prospect Avenue is even more outrageous and unacceptable. These lenders need to step up and stop abusing our communities with their neglect.”
The report shows a pattern of banks ignoring a 2009 state law sponsored by Senator Klein that required banks to maintain and secure foreclosed properties in their possession. In the event that they fail to act, the law also gives municipalities the power to clean up the properties on their own and bill the bank for the cost.
On April 25, a 12-year-old boy and his parents died in a fire at 2321 Prospect Ave.  The property had been owned by the Bank of New York Mellon due to a foreclosure and had open complaints against it for a faulty boiler, bad wiring, illegally subdivided apartments, and a lack of access to exits.
Senator Klein's Office found close to 2,000 foreclosed properties in the five boroughs  with some 3,751 open violations. Multiple bank-owned properties are the subject of similar complaints as the Prospect Avenue property. Included in this list is a property situated just three blocks away from the fatal fire.
That Citi-owned property, located at 2290 Beaumont Ave., Bronx, has 13 open complaints that included multiple illegally subdivided apartments. People appeared to be living in the building.
Additionally, spot checks by Senator Klein's Office, also found that some bank-owned properties with the most open building violations also appeared to be occupied.
These properties included:
1055 Martin Luther King Blvd., Bronx,  which has the dubious distinction of being the bank-owned residence with the highest number of violations in the Bronx and the second highest in the entire city.  These complaints range from illegal conversion of apartments to structural defects, sinking floors, and a defective boiler.
1744 Clay Ave., Bronx.,  which has 60 open violations, with new complaints lodged as recently as two weeks ago.
“The condition of these properties place entire communities in harm's way,” said Senator Diane Savino, (D-Staten Island/ Brooklyn.). “If the banks can't be counted on to maintain their properties, we need to use the resources at our disposal to make sure people are not placed in harm's way, and that these lenders pay for every single repair.”
The full list of  the worst bank-owned buildings in New York City are:
A borough -by-borough breakdown is included in Senator Klein's report: 'Who is Accepting Responsibility?: A Survey of Bank Owned Properties in New York City.'
The Top Five Lenders with Open Violations on Foreclosed Properties are:
Jonathan Levy, Deputy Director for Legal Services NYC - Bronx's Housing Unit, said: “It’s time for financial institutions, whose reckless lending contributed to the foreclosure crisis, to take some responsibility for the aftermath.  Tenants – especially lower income tenants who have few options – should not be forced to live in dangerous conditions.”
Jean Sassine, Homeowner and Board Member of NY Communities for Change, said: "This law is primarily about making lenders take responsibility for the mess they continue to make. If the city doesn't hold banks accountable for maintaining their own property, then it's just like giving them another taxpayer-funded bailout."

“When the MTA fails to manage its service diversions properly, it's more than an inconvenience; it's a waste of taxpayer money and it derails local businesses,” Comptroller DiNapoli said. “Our audit found that MTA’s service diversions are increasing in frequency and leaving taxpayers on the hook for millions of dollars in cost overruns. The subway system is showing its age, but the MTA has to do a better job managing all aspects of these diversions, from rider notification to budgeting.”

“Sadly this confirms the nagging suspicion of riders, residents and business owners alike, that subway service is taken down more than necessary,” Comptroller Liu said. “The MTA must understand that the City never sleeps and weekend service is neither ancillary nor expendable. We expect the MTA to maintain and repair the tracks, while keeping disruptions to a minimum.”

The first joint audit conducted by the State and City Comptrollers in more than a decade recommended that Transit make significant improvements when it comes to budgeting, scheduling and managing service diversions. The audit, which covered a period from January 2009 to January 2011, brought together the expertise of the staffs of both offices and expanded upon the series of ongoing audits both have conducted of the MTA.

In June and July 2010, auditors visited 39 stations that were affected by diversions. They found:
 No more than 20 signs at any station, despite Transit’s claim of posting 50 on each platform;
 No signs in any language besides English at all 39 stations, despite Transit’s policy;
 One sign in each of 10 stations on the 1 and 2 lines, but no signs at street level, in cars or on platforms;
 Only two of 13 Americans with Disabilities Act stations checked had signs in elevators, despite Transit’s policy;
 Transit’s only written policy for informing riders of diversions consists of newspaper advertisements, which are required to run forall diversions. Newspaper ads were only created for two of 50 sampled diversions (Fulton Street Station and World Trade Center E line).

More Diversions, Scheduled Poorly: Work Starts Late, Ends Early The frequency and duration of Transit’s subway diversions are increasing. Between 2008 and 2010, the number of weekend diversions rose from 47 to 74 and the number of diversions lasting for at least one month increased from 7 to 57.

Transit often reroutes riders’ trains even when no work is taking place. When asked for the General Order Worksheets that track time spent on each diversion, Transit management could only provide auditors with 29 of the 50. Of those 29 diversions, work started late on 28 and stopped early on 21. Unproductive work time ate up anywhere from 10 to 27 percent of the time trains were diverted, though there was no cost mitigation. Transit management wasted an estimated $10.5 million in this manner over the 3,332 diversions in a sample period from January 1, 2009 and July 14, 2010.

$26.6 Million Over Budget
Spending on diversions is not properly managed. The Comptrollers reviewed 15 diversions covered by 12 contracts budgeted at $141.7 million. Four of these contracts went over budget by a combined $26.6 million and cost a total of $83.1 million. The MTA’s financial constraints demand that Transit properly monitor costs during diversions and keep them within budget.

Recommendations
The Comptrollers issued five recommendations. The MTA and Transit should:do
1. Reevaluate its budget for alerting the riding public about planned subway service changes due to diversions;
2. Monitor expenditures for service diversions and justify spending over budget amounts;
3. Ensure that diversions adhere to scheduled start and end times for service diversions and restore normal subway service as soon as possible after diversion work is completed;
4. Use updated ridership data to determine shuttle bus deployment for transporting riders during a subway diversion;
5. Adhere to Federal law and Transit procedures related to communicating with the public regarding diversions.
Posted by 100PercentBronx at 3:52 PM No comments: