“It was my privilege as a fellow Dominican-American to serve with Senator José R. Peralta, who was an honorable steward of the public trust and tireless representative for communities in Corona, East Elmhurst, Elmhurst, Jackson Heights and Woodside,” said Rep. Espaillat (NY-13). “As a main sponsor of the New York state DREAM Act, Senator Peralta believed wholeheartedly that we each have an obligation to ensure equal opportunities for the advancement of all persons.  Renaming the New York State DREAM Act in his honor would be a fitting tribute to his legacy and the work that will continue for generations to come.

“Respectfully, I ask that when the New York State Legislative Session reconvenes on January 9, 2019, that both the Assembly and Senate come together to rename the New York State DREAM Act in honor of Senator Peralta and upon its passage, that Governor Cuomo sign the bill into law recognizing and codifying its most ardent champion, New York Senator José R. Peralta, into the official record.” 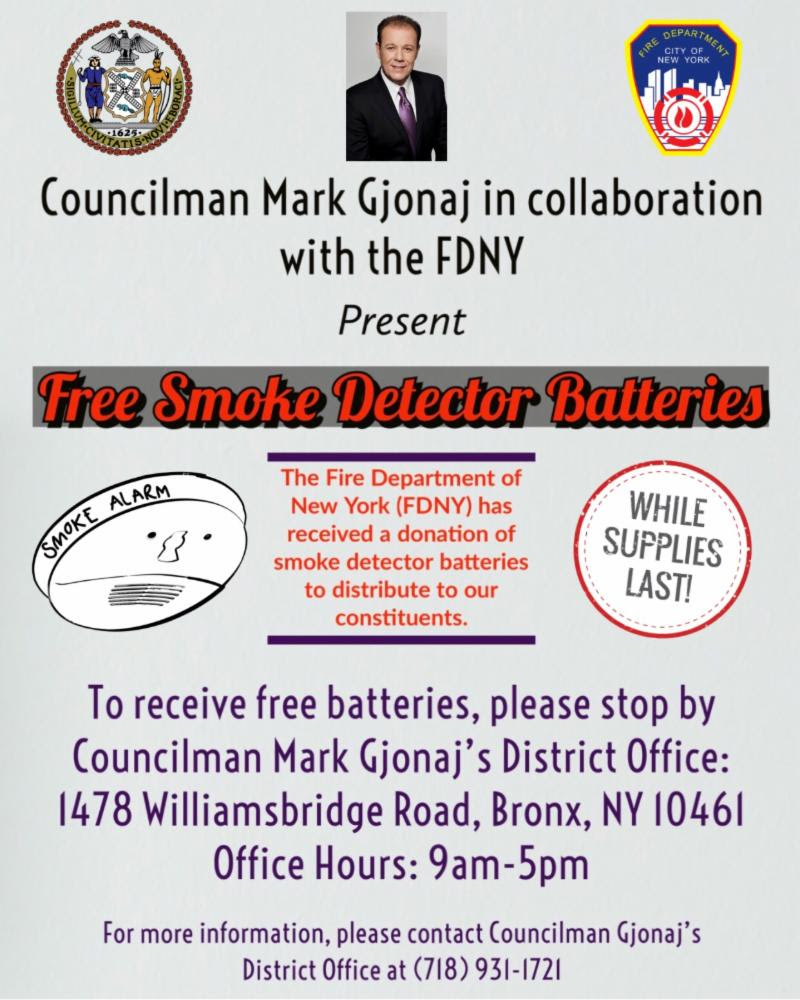 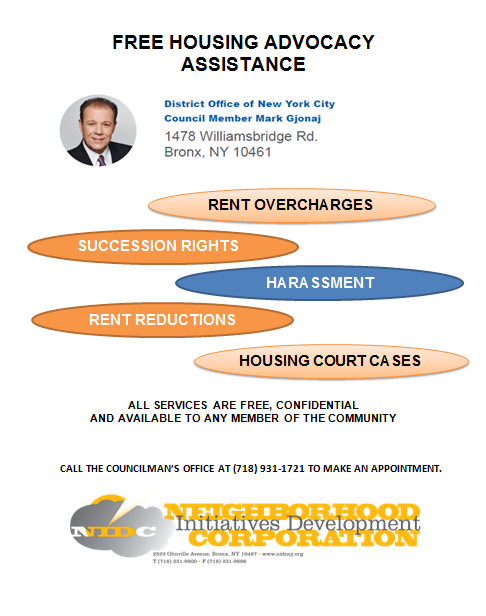 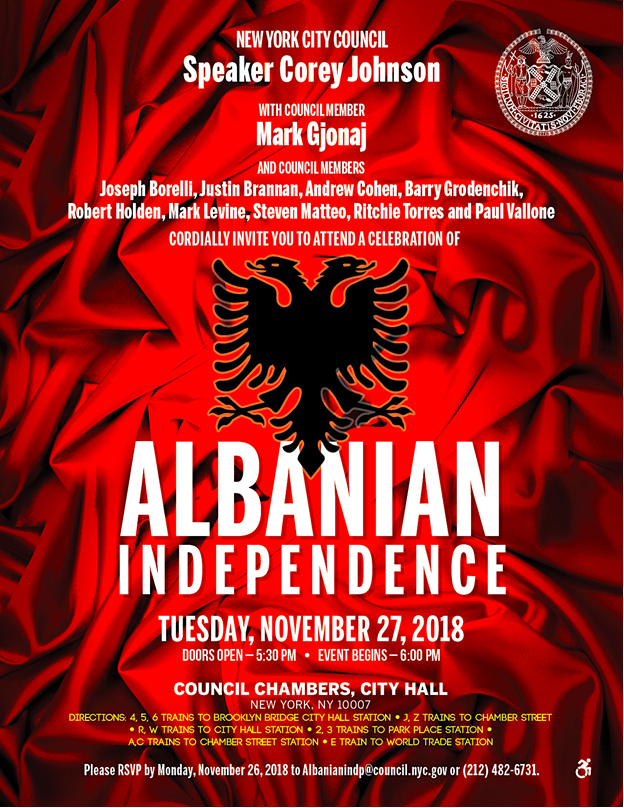 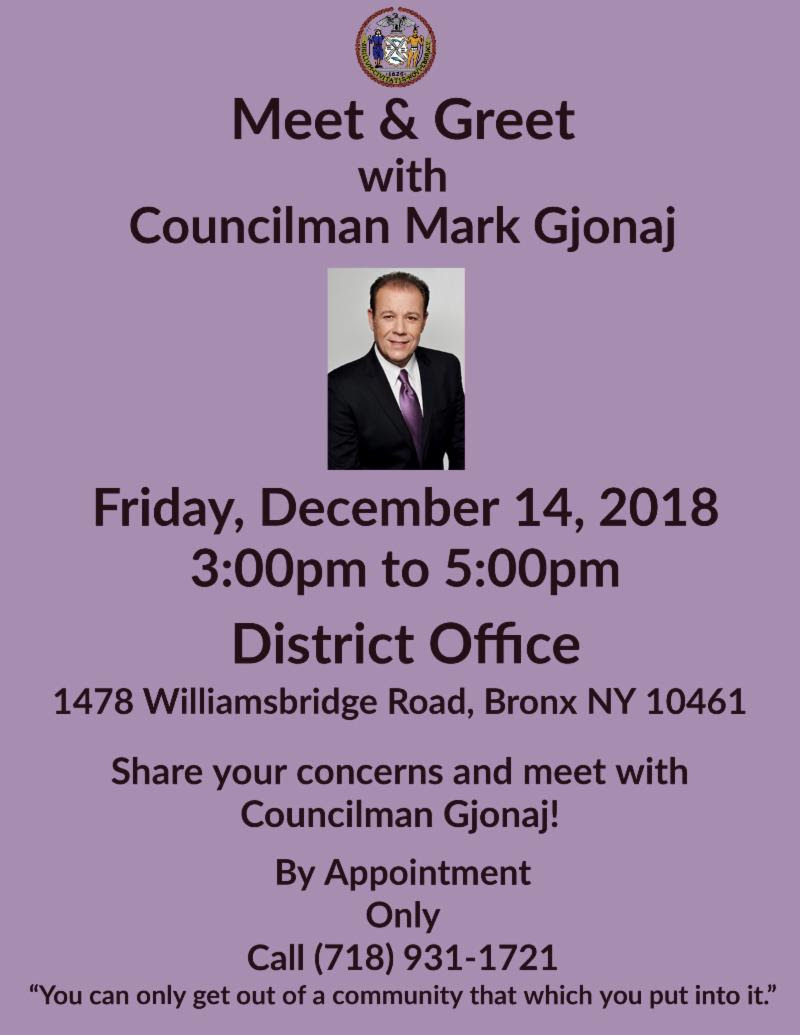 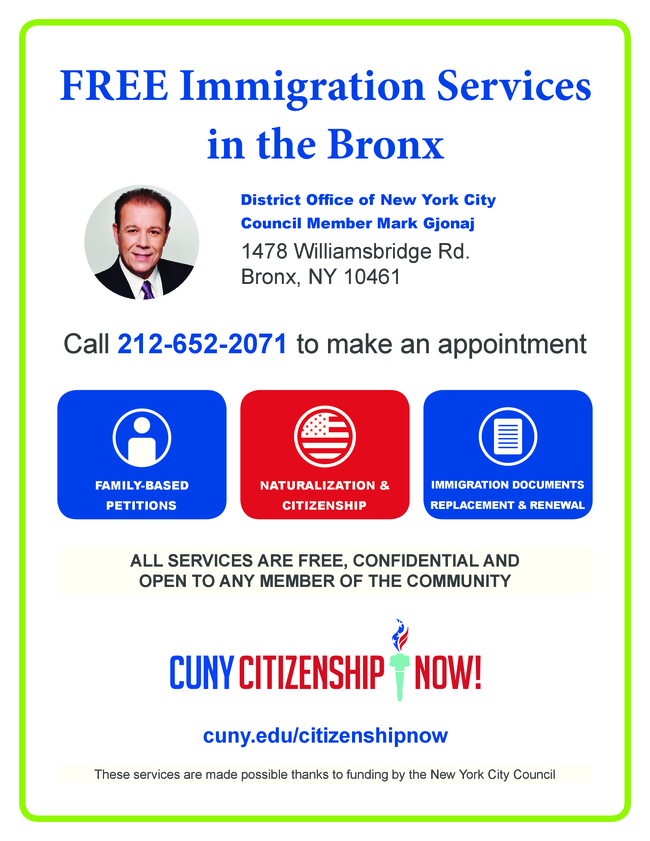 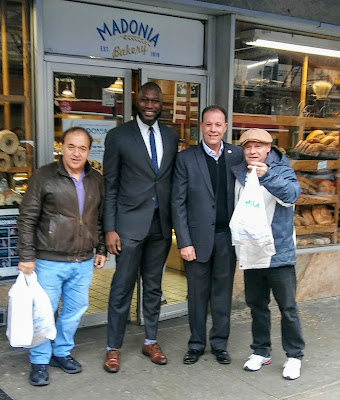 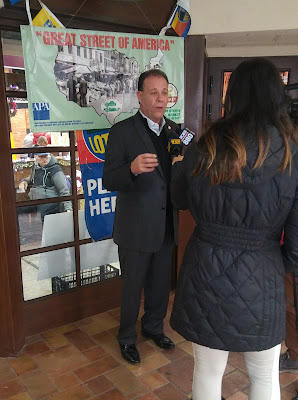 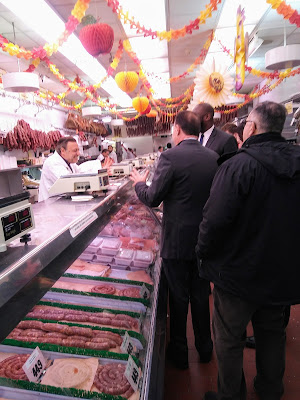 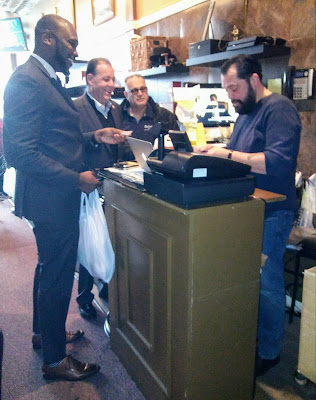 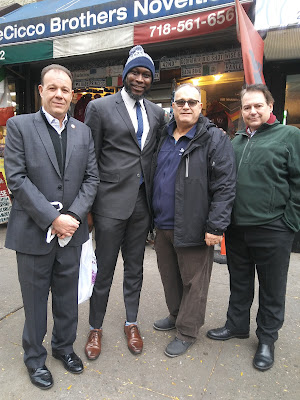 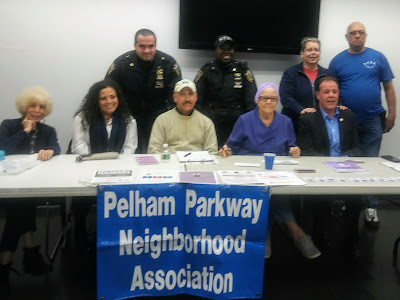 Councilman Mark Gjonaj, Assemblywoman Nathalia Fernandez, and representatives of the 49th Precinct attended the monthly Pelham Parkway Neighborhood Association meeting, which was well attended. Members of the community asked several questions about 'quality of life' concerns that have become more apparent in the community. Councilman Gjonaj and Assemblywoman Fernandez answered most of the questions, and Councilman Gjonaj invited residents to sign up for his meet and greet and his weekly newsletter. 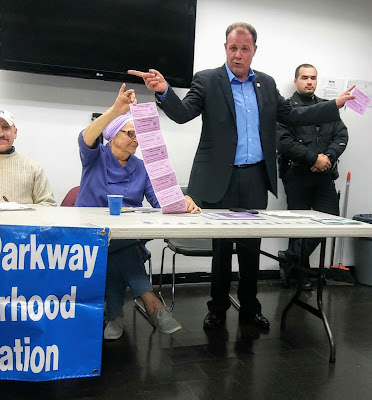 Above - Councilman Gjonaj answers a question from a member of the Pelham Parkway Neighborhood Association. PPNA President Edith Blitzer holds up some small stickers for residents to place on illegally parked cars to give the owners a warning.
Below - Sonny Vataj owner of Exit Reality thanks Councilman Gjonaj for his service to the community. Mr. Vataj also brought some turkeys to give out to the community. 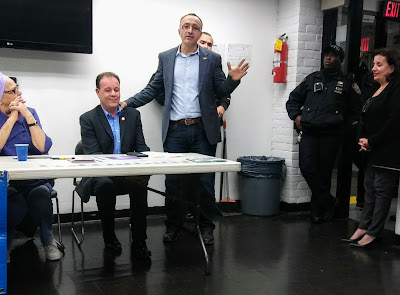 Later on after the meeting 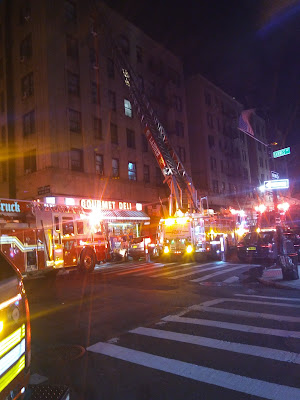 Above- After the meeting I turned the corner onto Lydig Avenue and after going two blocks I found this. It looks worse than it was.
Below - Firemen can be seen going up crawl spaces from the P & T Laundromat located at 786 Lydig Avenue. Firemen had to go to the roof to make sure the fire was completely out before leaving. 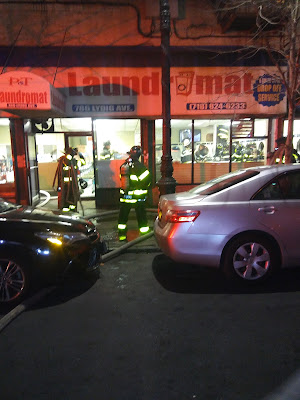 Closure: At the discretion of NYPD

Email ThisBlogThis!Share to TwitterShare to FacebookShare to Pinterest
Labels: 2018, Weekend Traffic Advisory for November 24 - 26 and November 28

The NYPD and New York City Police Foundation, together with other dignitaries, marked the beginning of the busy holiday season with the unveiling of the newly renovated NYPD Times Square Substation. A centerpiece in the heart of New York City, the Times Square NYPD Substation is a state-of-the-art building advancing the Department's security efforts for the hundreds of thousands of residents and visitors who pass through the area every day. It will also be a dynamic mechanism from which the Department can share information and engage with the public in a significant way.

The New York City Police Foundation provided funding support for the project, including a generous gift of $1 million from Vornado Realty Trust, made possible by Daryl Roth, Broadway Producer, and Steve Roth, Chairman of the Board and Chief Executive Officer of Vornado Realty Trust. Thomson Reuters and the Steven and Alexandra Cohen Foundation also made major gifts to the New York City Police Foundation in support of the project.
"The NYPD's vastly-improved Times Square Substation enhances our ability to connect with New Yorkers and the millions of visitors to our great city each year," said Police Commissioner James P. O'Neill. "To push violence and disorder down past already record-lows, it is imperative that our cops keep building trust and strengthening relationships with all the people we serve. The New York City Police Foundation is bolstering that mission by funding this important project and supporting our Neighborhood Policing philosophy. I thank the Foundation for its unwavering support of the men and women of the NYPD, and for helping our cops safely protect everyone in an effective, efficient, and professional manner."
"Millions of families and tourists come to Times Square every year to see and experience the bustling metropolis of New York City — the Crossroads of the World," said Mayor Bill de Blasio. "This new substation will help keep every visitor safe, and ensure that Times Square remains a popular destination site for years to come."
"This tremendous project is another great example of the strong public-private partnership that exists between the New York City Police Foundation and the NYPD," said Andrew Tisch, Chairman of the Board, New York City Police Foundation. "Together, we were able to complete the renovation and redesign of one of the NYPD's most visible outposts, efficiently and at a reduced cost, all while allowing the NYPD to continue to focus on their important work of keeping everyone who visits and calls New York home safe."
Located on 43rd Street between Broadway and Seventh Avenue — at the "Crossroads of the World" — the newly renovated facility serves as the functional base of operations for the NYPD in Times Square. The 1,200 square foot, glass and steel building reflects the new dynamic of Times Square and enhances the business environment, while providing increased surveillance and security. Using modern technologies to further engage with the public, the facility features interactive technologies that will make the police department's presence in Times Square more visible and accessible.
Posted by 100PercentBronx at 9:49 AM No comments: 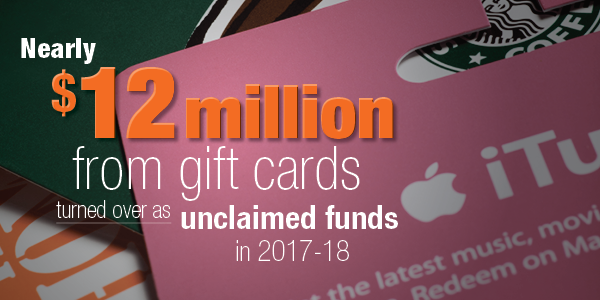 State Comptroller DiNapoli is urging New Yorkers to read the fine print on gift cards this holiday season for details about fees and expiration dates. While some gift card sellers have done away with inactivity fees, consumers should still ask whether fees apply.

TODAY, November 24th, NYC Department of Small Business Services (SBS) Commissioner Gregg Bishop will celebrate Small Business Saturday with two commercial corridor tours in the Bronx. The tours will promote shopping small this holiday season and will provide an opportunity for local businesses to ask questions and learn about free resources to help their businesses thrive.